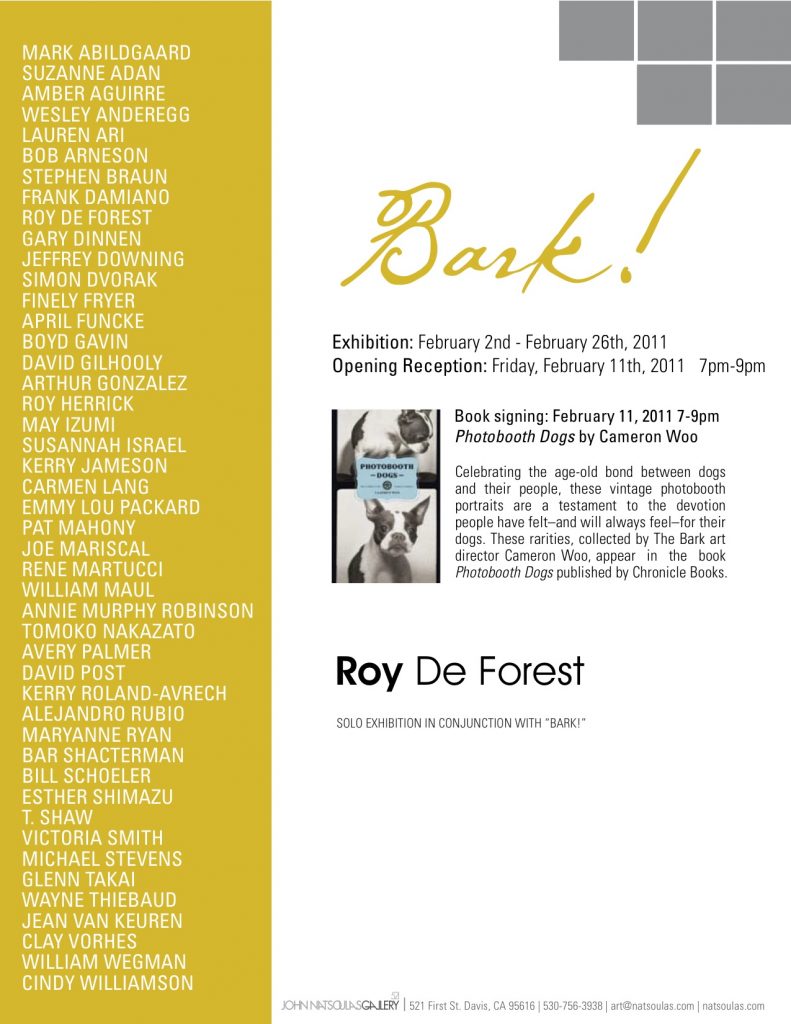 The John Natsoulas Gallery has had a long history of working with dog imagery. For the month of February, “Bark!: An Artistic View of Man’s Best Friend”. This exhibition will be showing dog pieces from many local artists including: Robert Arneson, Wayne Thiebaud, David Gilhooly, Robert Ransom, Arthur Gonzales, Esther Shimazu, Jeffrey Downing, Stephen Braun, Avery Palmer, Amber Aguirre, Rene Martucci, and many, many more. In conjunction with “Bark!”, we have a solo exhibition by the world-renowned dog artist, Roy De Forest.

In conjunction with the opening reception, there will also be a book signing for the book, “Photobooth Dogs”. This book was compiled by Cameron Woo, the co-founder and creative director for the dog-centric magazine, The Bark.  Most of the photographs within the book are a part of Woo’s personal collection and the rest have appeared after hours of combing through flea market photographs. One Bark reader submitted an image of the inventor of the photobooth, Anatol Jesepho, with his terrier (c. 1928).

Dogs have a long history of being involved in art. Many artists have included dogs into their works including Picasso, Gaugin, and Lautrec. Dogs are beloved to many artists and their patrons. Going back to the 18th and 19th century, nobleman and royals would have their dog companions immortalized by artists. Even going back to 2008 b.c., there have been paintings on the walls of caves featuring dogs with their owners. Dog paintings have helped authors view and trace dog lineage and breed genealogy through the years.