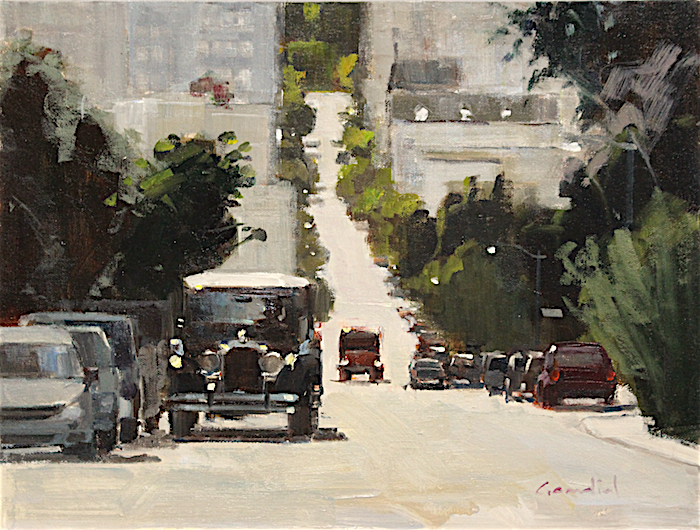 The John Natsoulas Gallery is pleased to announce New Paintings by Philippe Gandiol and Jerry DeCamp. The exhibition will run from November 29th-December 30th, 2017.

Philippe Gandiol is one of the best interpretive painter of night scenes. His ability to portray cafes and city scenes in SF, Sacramento and Europe are his signature. Somehow he picks up the light in the darkness and he has a wonderful ability to, through his very painterly and free paintings, to interpret city scenes, parasols, people, the lights in the windows of shops, the hanging flags and signs. He has an unbelievable ability to create depth as most of his work has a road that has cars or people or trains. Gandiol is a bizarre mix between a California Artist but has a French twist. Although he understands the California light and color he still paints with a little bit of an impressionist background. His work is very romantic and poignant and he has incredible use of the brush. Gandiol is clearly influenced by masters such as Vincent van Gogh, Cezanne and other post-impressionists. “I am seeking, I am striving, I am in it with all my heart.”-Vincent van Gogh.

Jerry DeCamp is an artist who has studied painting and print making with Wayne Thiebaud and Roland Peterson. He has also studied art history with Jeff Ruda and Seymour Howard. He has worked in Paris as well as California, with a strong background in abstract expressionism. His landscapes and cityscapes have a remote feeling of minimalism. Between the abstraction of the sky, the water, and the buildings he has created this bizarre loose minimal look which has a similarity of the layering of a Rothko painting.

George Tchobanoglous is a Professor Emeritus in the Department of Civil and Environmental Engineering, at the University of California, Davis. Photography has been a lifelong hobby and passion. He began taking photographs when he was fifteen and printing them in a makeshift darkroom in the cellar of his parent’s farmhouse in Patterson, California. Professional and personal travels have provided George the opportunity to photograph throughout the world. The diverse photographs in this show, taken over a period of 50 years, reflect the wonder of finding unique people, objects, and settings to photograph. Where possible, the images taken at different locations and times are juxtaposed to illustrate a commonality of ideas and vision.