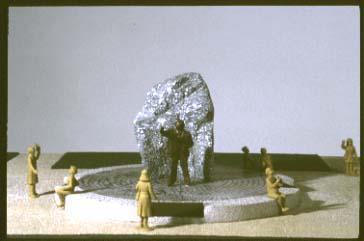 The maquette is a model for a project that includes information about the construction and reception of that project. As such, it can incorporate a strategic plan that, by creating a temporality separate from the space of production or consumption, opens up layers of consideration that make room for the idea of a ‘artistic discourse’ that critically assesses the project in terms of its opportunities and foreclosures. The maquette can involve manipulation of the point of view, margins, imaginary observers (fictims), and narratives about the life of the art object itself. As Picasso’s maquettes make clear, the work’s dimensionality is open for consideration. Spaces and time sequences may be ‘inserted’ to create certain points of instability or opportunity.

1. the analogy of film editing

Maquettes establish, for the ‘static’ visual arts, the same flexibility available to film through the process of discontinuous editing. In the film, Aristotle’s ‘unity of place and time’ is established artificially. Actual film shots can be filmed at any time and at many different places. It is the art director’s job to insure continuity between shots that must be connected to appear as if they took place at the same time and place. A shot/reverse shot assembles an apparent conversation although the interolocutors may have spoken their parts at completely different times without the listener physically present. Also, the location of the camera determines the field of visibility which can be further manipulated through angle, focus, and mattes.

For the architectural and landscape project, the maquette can be applied directly, using the analogy of the site as a ‘project in process’. As with the modern digital technique of freezing figures of a scene in the middle of some dynamic action while the camera or other characters have freedom of motion, this ‘freeze frame’ use of site juxtaposes an alternative time-space beside the representational one. The technique is in reality no more than the standard division of space in the theater, where the inhabitants of the dark auditorium are compelled to remain still and silent while action takes place on stage. The reversal of the freeze frame simply reverses this condition.

2. applications of the maquette idea As is evident in Picasso’s maquettes of his small guache (1919), ‘construction’ can mean
a dislocation of the space as it is ultimately ‘consumed’ by the intended audience. Is this space determined by merely practical concerns? Clearly, Picasso seems to be working into the small goache ideas that never reach the typical viewer. The disclocation of planes and elements from their ‘real world’ assembly logic shows that the dimensionality of the painting’s point of view is expanded in an alternative way — specifically NOT to reconstruct the presumed objective model but, rather, to deal with the ‘frontality’ of the painting surface in ways that back-project a logic to space itself.

The maquette can be imagined to be a device that enables time and space to be expanded — ‘pried apart’ — to admit imaginary motions, placements, points of view, and other key structures that would be ruled out following the representational-instrumental logic of geometric perspective. Just as the section drawing or model opens up the building or site in a way that allows an ‘illicit’ inspection (impossible in real life), the maquette goes further by expanding the rules and logic of this cut-away procedure.

3. relation to the Bavcar method