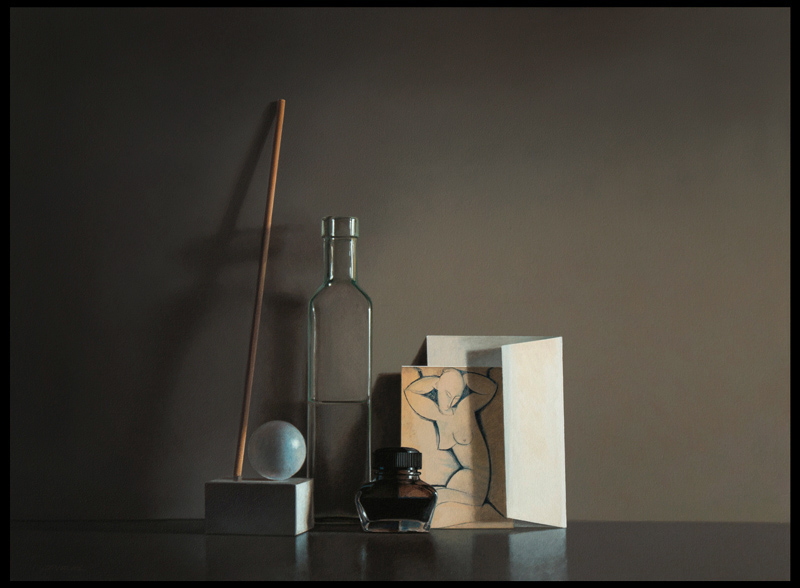 The John Natsoulas Gallery is pleased to announce the International Still Life Exhibition. Guy Diehl will be giving a lecture on his painting on January 6th, at 4pm.

The exhibition will run from January 3rd-January 27th, 2018. The opening reception will be on January 6th, from 7-9pm

At the age of eight Guy Diehl stumbled upon the visual magic of linear perspective and with this new perception suddenly unlocked a whole new world for him. This all played a part in how he would shape his life and career as an artist and educator.

In 1972 as an undergraduate student at California State University, East Bay (Hayward) he had the fortunate opportunity to study with first generation Pop Artist, Mel Ramos. In 1974, he began to work on his Masters degree in Fine Art at San Francisco State University. He studied with first generation Photo-Realist artists Robert Bechtle and Richard McLean. He graduated with his MA in 1976.

Beginning in 1984 Guy began his still life series, smaller and more intimate paintings. This enabled him to move away from his strict Photorealism style of painting to a more flexible interpretation of what he was seeing.

In 1992, Guy began to concentrate on the book as a primary subject matter, with references to art history, which would include artists of the early Modernist period from 1900 to the present. His aim is to first capture the viewer’s attention with the objects themselves, then encourage the viewer’s further reflection on the work and its narrative. Guy’s concept of art-about-art has become the focus of his work. It is not a new concept as artists have been remixing ideas from other artists throughout history. By referencing artists’ images with books and their titles, they are used to comment on or link to the objects within the painting. He applies this juxtaposition to place the familiar in a different context, combining diverse ideas to create unexpected compositions.

Guy sees himself as an interpreter, who is making a record of his observations. These observations are intuitive, as well as responsive to images within the composition. The satisfaction with his work comes when he can make a painting as minimal as possible and still capture the fundamental nature of the subject matter. To know what to paint and what to exclude is the challenge. This distillation helps reveal the essence of a painting for him. As he continues with this exploration, he’s challenged to take his work further both in content and subject matter. Guy sees an ongoing refinement and depth in his work that grows and evolves as he moves closer to what is most important to him; to make a worthy painting that reflects human culture both past and present.