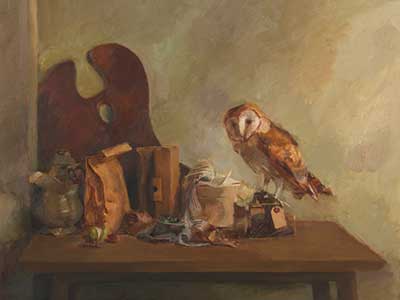 James Weeks began attending the California School of Fine Arts in 1940, and began teaching there part-time in 1948. He was as consistently committed to figuration as any artist in the Bay Area during those years. Many of his figurative works in the mid-’50s are marked by a great energy of application, a singing sense of color and a feeling for the monumentality of the human form. Weeks was influenced by European art—by Matisse, Munch, Beckman and early Picasso, rather than the Dadaists and Surrealists. By the time he put his work into the “6” in 1955, he had already shown at San Francisco’s Lucien Labaudt Gallery in 1951, and had been given a show at the Legion of Honor in 1953. Like Park, he entered the “6” during the ongoing debate over figuration.

Ilaria Rosselli Del Turco was born in Genova, Italy, in 1967, descending from a family of Florentine Renaissance painters. Soon after her training as an illustrator, she reconnected with her family roots and turned to oil painting. In 1999 she moved to London where she continued to develop her practice and where her work has been included in major painting prizes. She shows regularly both nationally and internationally.
In her current body of works she reflects on the meaning of belonging while being elsewhere. Through distilled light and colour she evokes a sense of yearning for a place and a time.
Join us at our opening reception on May 30th from 7 to 9 pm!
+ Google Calendar+ iCal Export