Wouldn’t You Rather Have Flying Saucers? an essay on artist William Maul by John Seed

Wouldn’t You Rather Have Flying Saucers? an essay on artist William Maul by John Seed

William Maul: Wouldn’t You Rather Have Flying Saucers?

Artist William Maul, whose Pop-infused paintings walk a fine line between zany humor and painful revelation, grew up in small town America. He is a product of Monroe, Michigan, the home of two classic American products: Monroe shock absorbers and La-Z-Boy Chairs. Maul lived in Monroe for the first 18 indelibly imprinted years of his early life. “Everything I do as an artist,” Maul comments, “pertains to my childhood.”

An imaginative, impressionable kid, who knew at age four that he wanted to be an artist, Maul remembers staring at Monroe’s equestrian statue of General George Armstrong Custer—who grew up in the town—fantasizing him to be a “hero.” Maul’s father worked at the Monsanto, and his mother stayed home, as working class mothers did in the fifties and sixties. She increasingly suffered from depression and ulcers, enduring a series of surgeries that removed most of her stomach. In horrible pain, she ate eat baby food, lost weight and was sent to an institution where she was given shock therapy. When Maul was 18 his mother committed suicide.

Against this mixed background of Americana and tragedy, Maul grew up diverted by popular entertainment, which offered solace and fantasy. A baby boomer who “grew up on television,” Maul loved the old 1930s monster movies that appeared on TV (to fill air time) and was a huge fan of the comedian Soupy Sales, who had a local show. “I ran home from school to eat lunch with Soupy,” Maul recalls, “and I ate a lot of what he ate.” Maul also loved monster magazines and remembers seeing the 1958 fantasy/adventure film “The 7th Voyage of Sinbad” at the movies with his cousins.

From Elementary through High School, Maul took every art class he could, and then enrolled at Central Michigan University. He remembers his first art teacher as being “very old, and just waiting for her pension,” but in short order Maul found himself studying with a young couple who had just come to CMU: Ed Epping and Peggy Diggs. Excellent artist/teachers who both went on to careers at other schools, they gave Maul one great year of inspiration and instruction and then an invaluable piece of parting advice: “Get together with another student, rent a studio downtown and just work off of each other.” Maul took their advice—generally ignoring his next set of college instructors—and his work took off.

After seeing a significant Photorealism show in Windsor, Canada in 1976, Maul went against the grain—most of his teachers at the time were Abstract Expressionists—and became a serious realist. “It was my way of introducing the object,” he recalls. Influenced by the paintings of Ben Shonzeit, whose paintings featured photorealist depictions of vegetables and fruit, Maul attempted a six-foot wide painting of crumpled aluminum foil and reflected color that “came out great.” Still a student at this point, and often broke, Maul wasn’t ready to take on the gallery scene, and went on renting and painting in cheap, empty spaces in Lansing, Michigan, paying the bills by working as a housepainter, carpenter and roofer.  Eventually Maul worked his way up to becoming the manager of an art center, working inside at a desk job. Often exhausted, he took part in a few juried shows—Philip Pearlstein juried him into one exhibition—but a stylistic turning point arrived when Maul realized he was sick of painting aluminum. “People like for you to do the same thing over and over,” Maul philosophizes, “but I have a hard time repeating things.”

Maul then gradually introduced human figures to his work, working in series. After moving to California in the mid-1980s, Maul’s real purpose as an artist emerged. Using his memories as source material, images of screen monsters, movie posters, second-rate movies, TV personalities, childhood toys and other bits of pop nostalgia allowed Maul to create fresh images that unlocked the joys and terrors of his upbringing. Once the “Pandora’s Box” of his childhood memories was opened, Maul’s work became a strange and compelling casserole of nostalgic vignettes; a kind of personal surrealism.

Maul’s 2002 canvas Dodgem shows the artist at age 11 on a bicycle that relatives had bought him as a diversion from his mother’s growing problems. It is, in that sense, a very personal image, but it also features a minor horror movie MC: “Sir Graves Ghastly.” A classically-trained actor who slummed as a TV host, Sir Graves is the kind of pop culture figure that Maul loves and can identify with. “He wasn’t even B level, but below that, and I identify with that,” Maul comments. Behind both Maul and Sir Graves—who float above and behind a carnival marquee—is a scene from a bad black and white science fiction flick, complete with figures fleeing from a flying saucer’s death ray. It is a painting about escape—from life’s real and imagined threats—in which a hack actor serves as a kind of spirit guide; a mentor even.

Another painting from 2002, I Hear it Still, I Guess I Always Will, is jauntily sexy and inviting. This time an anonymous, champagne-toting gentleman from the cover of a 50s men’s magazine and Nancy “These Boots are Made for Walking” Sinatra invite the viewer into a TV-land fantasy of Las Vegas. It’s a nostalgic homage to certain men’s magazines—the kind without nudity—that let every young man fantasize himself as James Bond. An affectionate painting, it reminds us of the days when champagne was a gateway drug and blonde sirens were America’s mythological sirens. Salvador Dali once said that all of his art came from his teenage erotic fantasies and in that sense he and William Maul have quite a bit in common.

After doing a lot of still lives of the “crazy stuff he collects” Maul then began a series of torn poster paintings, mashups of a sort. Maul collects toys, old movie posters and all kinds of movie memorabilia: “All the things I once had that were thrown away, I try to get back.” One of these paintings, Super Sonic, is a kind of “layered” fantasy that evolved image by image. The Mexican wrestler “El Santo” came first, followed by other images that Maul selected by shape, color and size, rather than by content. Somehow “Hello Kitty” rhymes—in some respects—with El Santo’s mask, and sexy women, a rose and a Polynesian Tiki-God add to the cryptic seraglio of stream of consciousness images.

After the birth of his daughter Maul moved to an apartment where he painted in a very small room. Knowing that he had to forego the impact of large scale, Maul decided to draw in his viewers with close-up images of screaming women from movie stills. “Everybody in the B movies of the 1950s and 60s was screaming,” Maul has observed.”

Of course, so was his mother, whose pain Maul had to learn to absorb, and visiting her in a Psych Ward before her death made a painful impression. In a way, Maul’s scream paintings are about that, but in a way they aren’t. Although his paintings often have a sense of disorder—even of mayhem—William Maul does not want his works to be too maudlin. As he told me on the phone: “I could paint something morose, but wouldn’t you rather have flying saucers?”

He makes a good point. 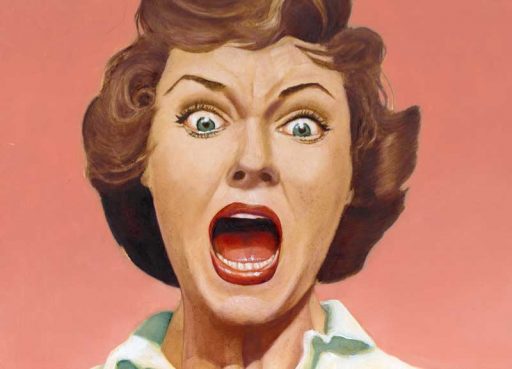 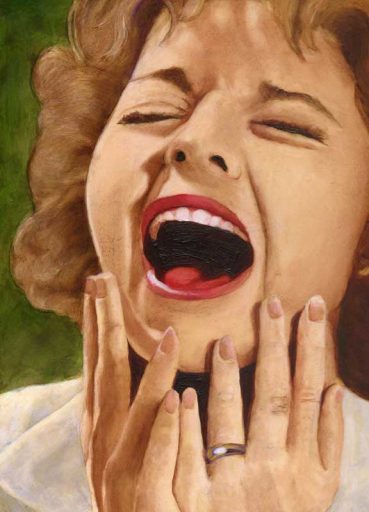 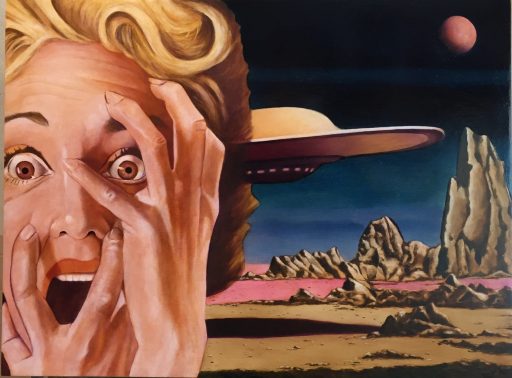 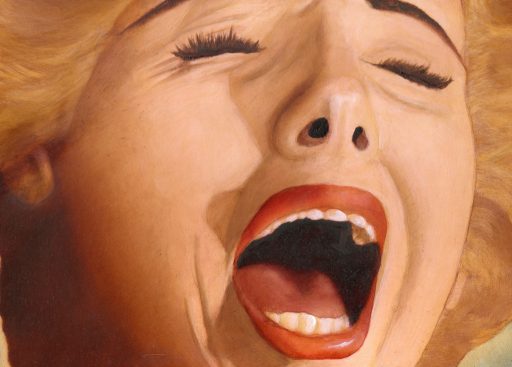