An essay by John Seed

Marcy Friedman, who has focused on figurative painting for the past few years, is an especially thoughtful, observant portraitist. Whether painting a friend, a family member or a professional model, Friedman endows her subjects with believability and intensity, working hard to capture just the right pose and attitude. “I’m interested in the inner soul of a person,” Friedman comments, “and the better you know someone, the harder it is to capture.”

There is an “art gene” in Friedman’s family, best personified by her uncle, Nate Lichter. Painting under the name Nahum Tschacbasov, he studied with Leger in Europe and exhibited in both modernist and social realist styles both before and after WWII. Although he was in his 80’s when she met him, Friedman recalls, he clearly displayed a riveting and challenging intellect. Friedman’s first exposure to figurative drawing came during her years at Stanford in Daniel Mendelowitz’  Life Drawing classes. After graduating, Friedman began to study with a variety of artists in the Sacramento area with an emphasis on painting from life. She worked for several years with instructor Benny Barrios, who paid local homeless people to model for two hour sittings: his classes were exciting and, since time was limited, students learned to work rapidly. By the mid 70’s, the demands of family and a growing interest in arts advocacy necessarily left little time for art. It wasn’t until 2011—some 40 years later—that Friedman returned to art as a refuge when her husband became seriously ill.

Around the same time, Friedman met artist Pat Mahony and asked if Mahony had any interest in hiring a model and painting from life. Six weeks later Mahony replied in the affirmative.

The resulting Thursday sessions have been going for nearly six years now, and a small core of artists has created a community around them. “I never get tired of it,” Friedman notes. “I returned to painting in acrylics and was successful with color but was not able to achieve the brush strokes and paint depth that I desired.  Two years ago I set aside the acrylics and switched to oils. That turned out to be a much steeper learning curve than I had anticipated, but it’s going well now.”

Friedman sees herself as a perpetual student who has been fortunate enough to be surrounded by others who see themselves the same way: “As I grew within the group, I found they were the most unselfish, supportive and encouraging individuals you could hope for as mentors and colleagues.”

One longtime member of the group, Jian Wang, is the subject of a recent Friedman portrait: she painted him before he recently left to move to New York. “I have known him for decades,” Friedman notes, “and I have enormous respect for him.” In her portrait, Friedman has Wang seated at a table in front of a meal in progress. His hands are folded and his expression indicates that he is listening and ready to speak: the painting in this way transmits its sitter’s ability to pay attention, make conversation and form meaningful friendships. Friedman’s gentle realism is the just right style to memorialize a man she finds honorable and “real.”

Respect and affection are also very present in Friedman’s rendering of her daughter-in-law Margie Friedman. In this case, Friedman’s sitter leans towards a table of books in a pensive mood. The interplay of light, shadow and color that give form to Margie’s figure deepen the feeling of contemplation and the ¾ view of her features also adds a certain respectful sense of privacy. “I didn’t want to paint her full on,” Friedman comments. “but I did want to indicate her intelligence and that personal mix of steel and softness.”

Working with a professional model name Sri, Friedman and her painting group realized that the simple act of disrobing would make a compelling image. Friedman’s painting plays the dazzle of Sri’s outlook off of the sculptural forms of her legs that rise to the painting’s midpoint as she unzips a black boot. As a result, the long-legged model comes across as composed and very much in charge of her own elegance.

Depicting another model—a young man named Adam—Friedman captures the turning away of his head towards a light source and shows how his attention is just outside the picture frame. Its yet another indication of how carefully Friedman is able to find her subject’s inner drive while diverting it a bit and injecting a hint of mystery to respect it. Perhaps the reason that Friedman “never tires of painting” is her quest for that which is elusive: the inner spirit that never can be entirely revealed or shown.

When asked what she plans to do in the future, Friedman has a quick answer: “I’ll be painting, there is no doubt about that.” She has a tremendous sense of discovery—just like her paintings—and a genuine affection and respect for others that motivates her to show them as deep, human and fully alive. 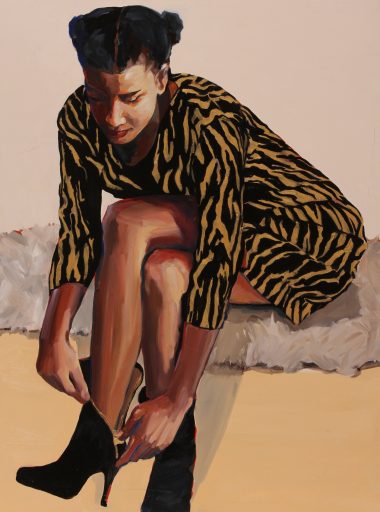