Lisa Clague: A Possibility of Being

Lisa Clague: A Possibility of Being

They always left some space.

And in that clear unpeopled space they saved

it lightly reared its head, with scarce a trace

of not being there. They fed it, not with corn,

but only with the possibility

of being. And that was able to confer

such strength, its brow put forth a horn.

~ This Is The Creature (an excerpt), Rainer Maria Rilke

Lisa Clague’s surreal and fabulous figures, with their chalk-white bodies, animal masks, and often bizarre accoutrements, like the fairy tales, myths, and dreams from which they stem, inspire wonder, curiosity, and sometimes fear. Clague uses art to investigate both her inner and outer life, and in so doing, creates a space for increased self-knowledge and transformation. Her hybrid figures sport masks, beaks, horns, caps, and animal heads, as they narrate stories of shape shifting, transference of power, and possibilities of being.

Clague draws inspiration from prehistoric goddess figurines, African masks, and Greek mythology, to translate her personal experiences and dreams into tangible forms. The Nile River Goddess, for example, is the Egyptian goddess of regeneration, and her head is often in the shape of a bird or a snake, living symbols of the great mother in 4000 B.C. Symbols of Egyptian biform deities and other prehistoric imagery and symbolism are obvious influences everywhere in the work.

Enigma combines both animal and human aspects. The beaked mask might represent a goddess of regeneration and seems to be looking into the future, while the center and forward-facing head has the aspects of a rabbit, which goes with the figure’s tutu, and might express the double aspects of what it means to be both a wife and mother. The third head, clearly that of the infant, is represented by the small head “tattooed” with pins or nails and whose voice is temporarily silenced with an oversized pacifier in the shape of a breast.

Much of Clague’s work after the birth of her daughter centers on negotiating and attempting to reconcile the wife/mother self with that of the artist. Imagery of childhood toys, nurturing, and the artist/mother drained of her creative powers recurs in many of the sculptures. Quiescent  and Still Breathing are strong examples of the work of this period. In Quiescent, the new mother, wearing a passive countenance and disgorging an umbilical cord, appears depleted. That this is a special occasion is evidenced by the mother’s headdress, a mitre, the liturgical bishop’s hat.  The infant sits on the mother’s right shoulder, the symbolic breast in her mouth. The long-beaked bird figure seated on the left, the symbol of regeneration, appears powerless and looks out at the viewer with suspicious eyes.

Whirligig Rabbit and Monkey On My Back express more playful themes and suggest significant changes in perspective. In Whirligig Rabbit, the figure sits resting on (or holding down the rabbit), while herself wearing the bunny mask. She wears unfashionable pom-pom house shoes and her tutu is in place, but limp. A wire-appearing tutu form hangs about her; its’ croquet balls suggestive of playtime. Like all of Clague’s work, this sculpture with its dominant domestic play bunny carries multiple connotations that leave much of the interpretation to the beholder.

Clague uses the monkey to represent not only childhood gabbling, but also the inner chattering that interferes with both spirit and intellect. The monkey is sometimes playful, but is an impediment to higher levels of consciousness.  It often represents a mood of anger or displeasure, and most times wears a tall, striped dunce’s cap as in Monkey Business and Monkey On My Back. Fairy tales, another source of inspiration for Clague, tell stories of how humans become animals. The primitive idea at the root of all of these stories is that the human soul, in passing from one shape to another, has to wear the outer sign or garment of the creature it desires to represent. Horse Girl with its truncated body and doll-like legs, suggests the artist’s nascent struggles for personal power. The armless body and add-on breasts, imply a powerless state. The  slip and rattan headgear hints, too, at some inner confusion. The horse head mask, which seems to be slipping and is set over a human mask, suggests a layering of concealment is in place and one that impedes easy access to the animal power of the horse and thus movement towards transformation.

In a later work, Inner World a possibility of being has clearly been achieved. In this double-headed figure, we see the head of what might be a submissive lamb, his head bowed by an empty vessel. The vessel, with an exterior like some deep-sea creature, a sea urchin perhaps, waits to be filled. The horse is no longer a mask, but a full head and firmly secured to the body, its power fully incorporated. The head is held in a noble pose, the gaze beholds the viewer with discrimination and authority. The hands hold a tinted lotus, or perhaps the Egyptian water lily, a flower held sacred by the Egyptians and the net tutu has been transformed into an open wire frame.

As we have seen, the recurrent subject matter in Clague’s work explores the body as a receptacle for knowledge. In the ‘80s, she literally turned the figurative tradition on edge by transforming humans into masked human animals. These hybrid figures, primarily female forms, communicate a complex symbolic relationship between humans and animals and between inner and outer realities.

Clague, who grew up in Cleveland, Ohio, studied at the Cleveland Art Institute where her father, a metal sculptor, was a professor of art. Her mother was a potter. At the age of 9, discovering the visual inventions of 15th century painter Hieronymus Bosch, Clague decided to become an artist.  Her early ceramic efforts were traditional pottery, but she soon moved on to create more abstract forms that were inspired by plants, animals, and other natural wonders. She began sculpting the human figure, while working on her master of fine arts degree at California College of Arts & Crafts, and was given the opportunity to further expand her technical knowledge during this period, being asked by Viola Frey to serve as studio technician for the ceramic department.

Clague’s early figurative work was inspired by childhood games, her doll collection, and her interest in the work of Bosch. Some of these influences have, of course, been carried into more recent work. Many of her figures feature sewing pins or screws to pin together body parts, masks and clothing — features that also add interesting visual detail during the firing process.

Frida Kahlo, Louise Bourgeois and French surrealist Hans Bellmer also influenced Clague.  Of special interest is the work Hieronymus a work that can be seen to reveal and conceal, to guide and misdirect. The title, which directly refers to the influence of Bosch, does not in any way alert the viewer to the clearly concomitant influence of Bellmer. Bellmer, famous for his doll sculptures, in fact, created a sculpture very reminiscent in at least form, to Hieronymus. His Poupee (1935-36) employs the double form, two bodices joined at mid-section. Clague’s Hieronymus clearly takes off from the Bellmer idea, but carries a depth and ambiguity beyond Bellmer’s work. Clague’s double torso incorporates two important influences, Bellmer and also Bosch. The Bosch trio, topping Clague’s vertical double form consists of a human face sporting rabbit ears and baring its teeth; the masked head of the other side, with its short horns and horse’s jaw, bears more resemblance to the devil than to any animal; while the central figure is unmasked, but wearing short, bleached horns suggestive of the Minotaur or an ancient horned god.  The other end of the elongated form is a doll form which hangs upside-down. The eyes are open, the arms flung above the head and the mouth open in what must be a scream. There is something of the chthonic in many of Clague’s sculptures. This is surely among the strongest and most disquieting of them.

Horns usually represent intimidation or are an indication of power. Horns, which are not uncommon in Clague’s work, can be seen in different work to change in representation. In We Are Three, we see the family unit. The long beautiful horns on the right side of the broad torso appear to represent a displacement of power from the feminine or mother/artist to the male/father. The mother and artist, in this work, can be seen to be separate; the docile-faced center figure with traces of umbilical cord running down from the mouth, a stain or a memory, and the two enlarged and deformed breasts. The head on the far left wears an alabaster mask with its long yellow goddess beak and oddly heightened mitre, a countenance of significance, but whose eyes lack the expression of life or energy.

A Little Tweak in an Otherwise Tedious World evokes a powerful space where the possibility of being, of transformation, seems inevitable. The mask with its long animal horns and large ears looks sternly beyond the viewer, strong, determined. And yet, the figure, obviously female, is dressed in a feminine satin slip and so seems clearly a dream for the future.

In the Nature of Things represents a wonderful state of being, a possibility achieved. The monkey mask is no longer threatening and appears controlled; the bird-masked figure with its lifted head and eyes gazing upward, gives the impression of an ecstatic joy. The broad torso’s breasts are here of normal size and unpronounced. The entire torso is adorned with flowers and other bits of feminine loveliness.  The center figure might represent the integrated whole, child and mother, mother and artist, masculine and feminine, intellect and spirit. There is a deep sense of completeness, of transformation in the countenance. The figure gazes directly at the viewer as a figure of wisdom and strength—it has “put forth a horn.”

Lisa Clague, unique among contemporary sculptors, combines a meticulous craft and vivid imagination formed from her dream material and personal experience to negotiate between realities. Using the effective unit of stories built around the human figure and allowing animal masks and heads to represent the moods and guises of the psyche, she evokes the space in which not only the artist herself can envision enlarged possibilities of being, but too, the beholder. 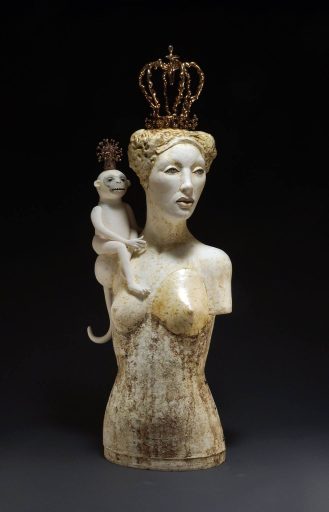 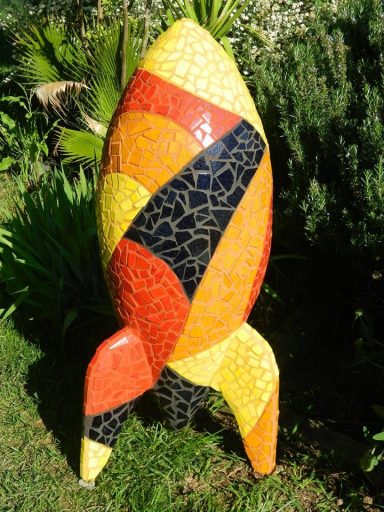 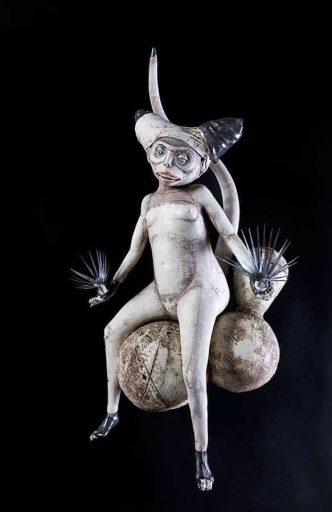 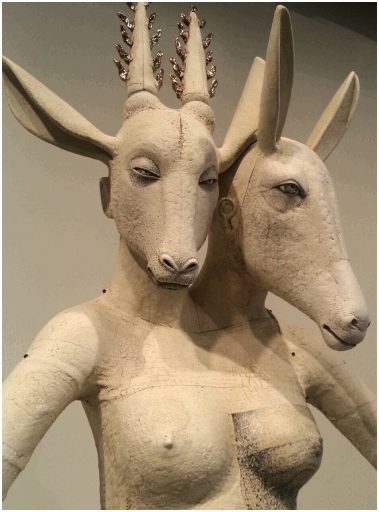 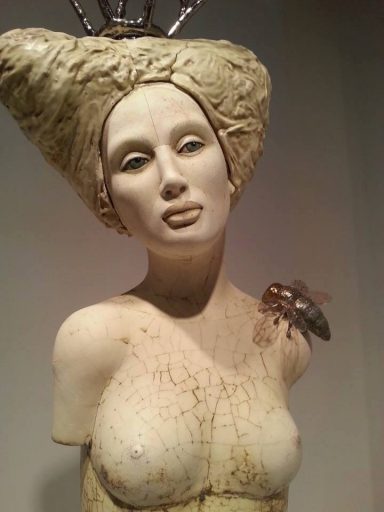 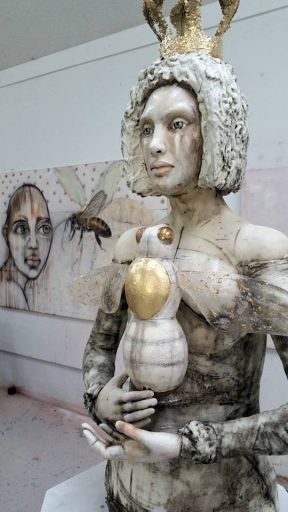 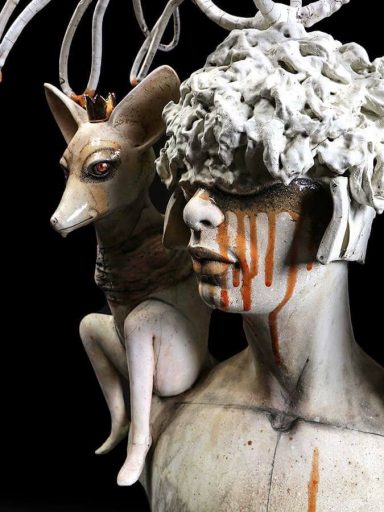 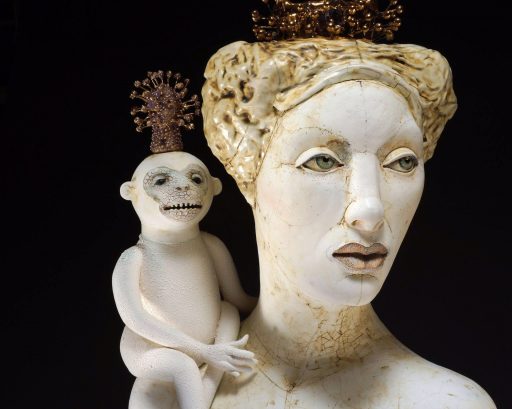