Kenjiro Kitade will be one of the exceptional presenting artists at the  California Conference for the Advancement of Ceramic Arts this April 28-April 30th. This young artist has been making a name for himself all over the globe. You will not want to miss the opportunity to experience a personal hands-on art demonstration as well as learn more about the artist and his work at his CCACA presentation. Register here today and reserve your seat.

Born in Tokyo in 1977, Kenjiro Kitade moved to the U.S. when he was 13. A creative and artistically inclined child, he later received his Bachelor’s and Master’s degrees at New York University where he studied ceramics. Merely a year after graduating, Kitade began establishing an international reputation by first winning the bronze at the World Ceramic Exposition in South Korea, and later showing at the highly selective SOFA show (Sculpture Objects and Funcational Art) in Chicago. The whimsical sculpture that has won him such accllaim teems with contradiction.

From natural cold earth to gleaming high-fire surfaces, clay is the ancient anatomic medium.  It is the medium in which time stands still, ideas are frozen, and yet a civilization is represented for all eternity.  By working in clay, I have been able to explore significant issues about our antonymic existence, as Selves that can only be defined by the presence of the other.

Sheep have been used in many metaphoric expressions, proverbs and allegorical stories among different cultures.  “Obedience” and “Cowardice” are the typical imagery of how sheep have been portrayed.  The relationship between a shepherd and sheep symbolize the relationship between the rule and the ruled. In the guise of sheep, I can present human frailty.  The sheep is a metaphor and is use to demonstrate human shortcoming.

My sheep are imbued with human characteristics, feelings emotions, and often times, form.  This blurs the understanding of this easily recognizable symbol and all that the lamb characteristically means.  What you see is a creature fixed between two worlds that can now tell you a story.  I am – as Japanese who is submerged in a foreign culture-like my sheep, transfixed in a world between worlds.  I am seated in the place where I see that both worlds can peacefully coexist as one, but only with the ability to yield. 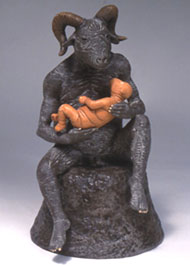 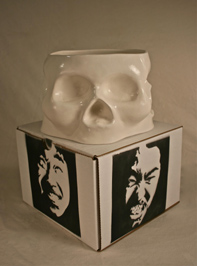 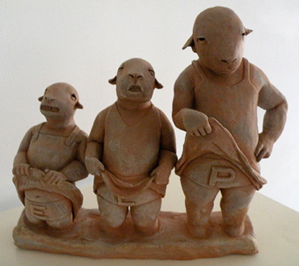 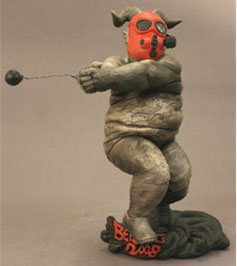 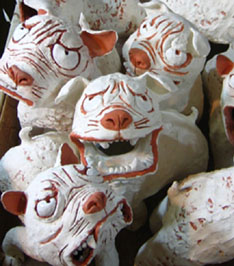