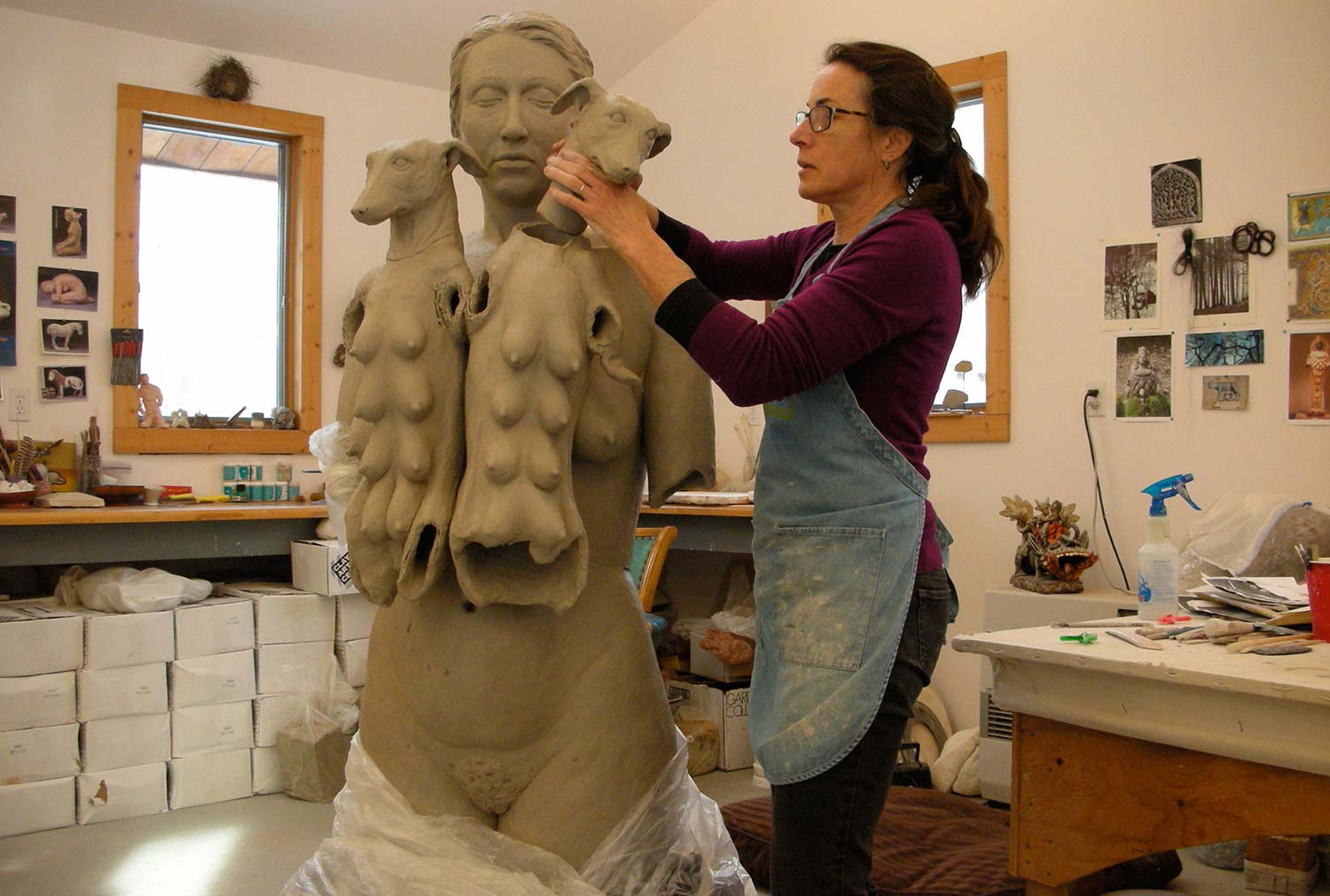 Adrian Arleo is a ceramic sculptor living outside Missoula, Montana. She studied Art and Anthropology at Pitzer College (B.A. 1983) and received her M.F.A. in ceramics from Rhode Island School of Design in 1986. Arleo was an Artist in Residence at Oregon College of Art and Craft in 1986-87, and at Sitka Center For Art and Ecology in 1987-88.

“For over thirty years, my sculpture has combined human, animal and natural imagery to create a kind of emotional and poetic power. Often there’s a suggestion of a vital interconnection between the human and non-human realms; the imagery arises from associations, concerns and obsessions that are at once intimate and universal. The work frequently references mythology and archetypes in addressing our vulnerability amid changing personal, environmental and political realities. By focussing on older, more mysterious ways of seeing the world, edges of consciousness and deeper levels of awareness suggest themselves.” 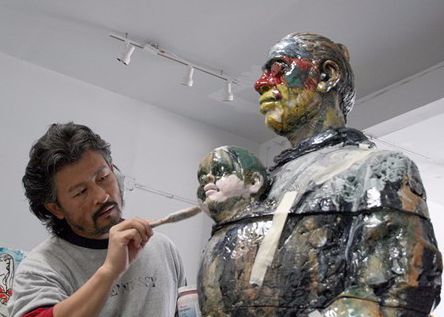 Wanxin Zhang was born and educated in China. He graduated from the prestigious LuXun Academy of Fine Art in Sculpture in 1985. In 1992, after Zhang established his art career as a sculptor in China, he relocated to San Francisco with his family and received his Master in Fine Arts from the Academy of Art University. Zhang had been on the faculty of the Academy of Art University, Department of Art Practice at University of California, Berkeley and California College of The Art in Oakland. Zhang is currently an adjunct faculty at San Francisco Art Institute.

Zhang’s sculptures represent a marriage between historical references and a contemporary cultural context; they carry messages of social and political commentary. His work is deeply influenced by the Bay Area figurative movement and artists such at Peter Voulkos and Stephen De Staebler. As a studio sculptor and educator, Zhang was the first place recipient of the Virginia A. Groot Foundation Grant in 2006 and the Joan Mitchell Grant in 2004. His sculptures have been shown in San Francisco,  Santa Fe, Miami, Seattle, Palm Desert and New York City. In 2007, his pieces were part of the 22nd UBE Sculpture Biennial in Japan; in 2008, his sculpture was selected by the Taipei Ceramics Biennial in Taiwan; and in 2013, he was part of the Da Tong’s 2nd International Sculpture Biennial in China. Zhang had his first solo art museum show at the University of Wyoming Art Museum in 2006, with solo museum exhibitions following at the Arizona State University Art Museum, Boise Art Museum in Idaho, Fresno Art Museum in California, The Alden B. Dow Museum of Science & Art in Michigan, Bellevue Arts Museum in Washington, and Holter Museum of Art in Montana. His works have been selected to be included in Confrontational Ceramics by Judith Schwartz, and can be found in major art magazines such as “Art News,” “Art in America,” “Sculpture,” and “American Ceramics.” Zhang has many public collections, and his private collectors are located both nationally and internationally. In 2012, the San Francisco Chronicle picked Zhang’s exhibition at the Richmond Art Center to be one of the Top 10 Exhibitions in the San Francisco Bay Area. 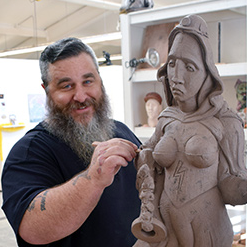 Chris Riccardo graduated with a BFA from Boston University in 1990. From 1998 to 2008, Riccardo taught as an adjunct faculty member in the sculpture department at Armory Art Center, Florida. From there, he became the sculpture’s department chair in figurative sculpture, anatomy, and bronze casting. Currently, Riccardo is the assistant curator of education at the Holter Museum of Art.

Riccardo’s sculptures are a direct physical manifestation of his moral struggles and most inner thoughts. They are frozen moments in time ripped from the on going struggle that takes place in his mind – the battle between good and evil, right and wrong, and a multitude of both morally and ethically questionable thoughts.

“My head is swimming with insecurities and feelings that sometimes make it an uncomfortable place to be. I want my viewers to share in this discomfort, to really feel what it is like to spend a minute in my mind. If one walks away from my work and feels somewhat violated, excited, intrigued, and maybe even a little happier, than they truly know who I am, and I have succeeded.

My process begins with a thought, a vision, a look, a trigger that draws me to the clay. Gone are the days of exhaustive preliminary sketches and maquettes, I simply visualize how I want the clay to look and begin to throw it into a solid mass. Slowly and painstakingly I begin to build and tear at the surface, gradually making aesthetic changes as I see fit.

My glaze surfaces are scared and busy, random but precise. Once I feel that I have nothing else to offer the clay, I begin the task of tearing down the piece, gutting the sections, reattaching and preparing for firing. The work is generally fired to 04 as well as my slips and glazes. The glaze surfaces are rough but bright, helping to lessen the blow of what some see as a dark and disturbing sense of humor in my work.” 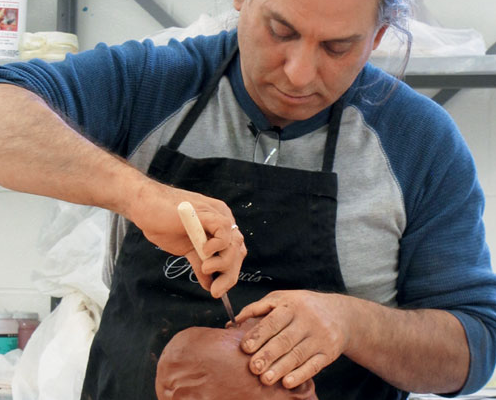 Dark, somber and foreboding, Arthur Gonzalez’s works encourage serious deliberation and reflection on the relationship between personal concerns and world issues. Raw in form, lacking in smoothness and rough in finish, the ceramic sculptures give glimpses of a conversation or a contemplation in progress. Gonzalez’s creations of ceramic and found objects reveal visions and feelings that are not polished but ongoing processes of gyrating thoughts and churning emotions that threaten to erupt into reality and consciousness to defy the fantasy of a peaceful experience.

Three distinct phases have influenced the direction of Gonzalez’s artistic career and expression. First, as a graduate student, at the University of California at Davis, under Robert Arneson and Manuel Neri, he entered the Master of Fine Arts program as a figurative sculptor during the late 1970’safter completing an Master of Arts in painting at the California State University of Sacramento. His second phase was as an artist in residence at the University of Georgia, Athens from 1981 to 1982. Gonzalez’s attitudes towards art changed through his exposure to a creative life-style that blended music and visual art. The third phase of Gonzalez’s career was through his involvement in the early 1980’s East Village Art Scene, in New York City, which fast-forwarded public recognition of his work. 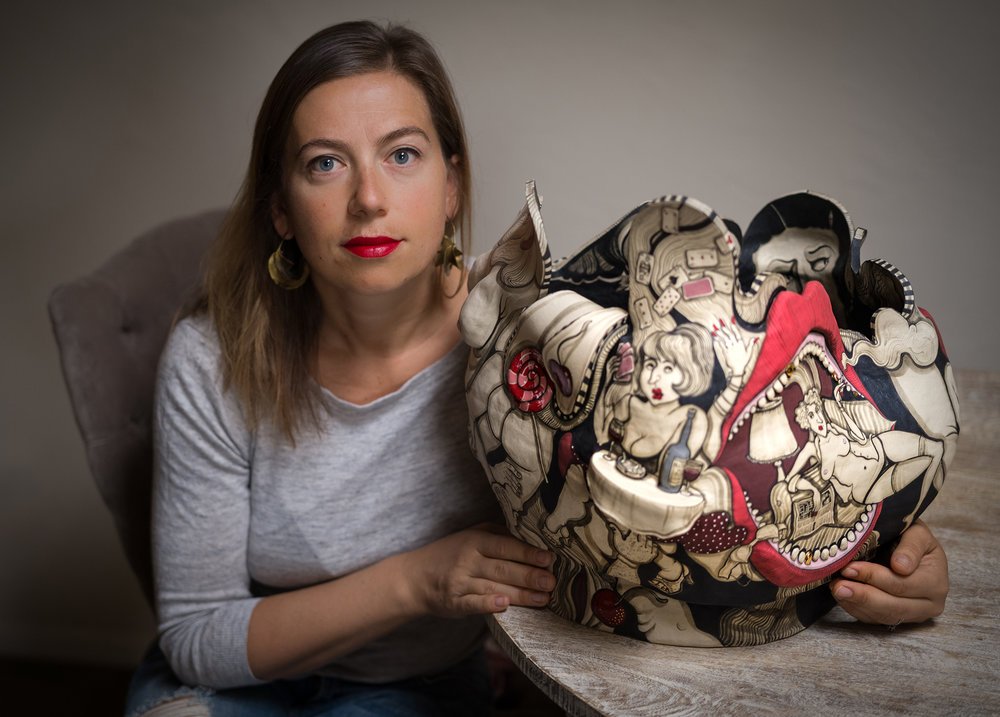 Yana Payusova was born in 1979 in Leningrad, USSR. Classically trained as a painter at the St. Petersburg Fine Art Lyceé, she later immigrated to the U.S.   She received an MFA from the University of Colorado at Boulder. Payusova’s paintings and sculptures blend the styles and symbols of folk art, Russian icons, graphic poster art, illustration, and comics, and reflect Payusova’s cultural heritage and her training in traditional Russian realist painting. Payusova exhibits both nationally and internationally, including recent venues at the DeCordova Museum and Sculpture Park, Howard Yezerski Gallery (Boston), Mimi Ferzt Gallery (NYC) and Galerie Caprice Horn (Berlin). She currently teaches at the University of Arizona in Tucson. 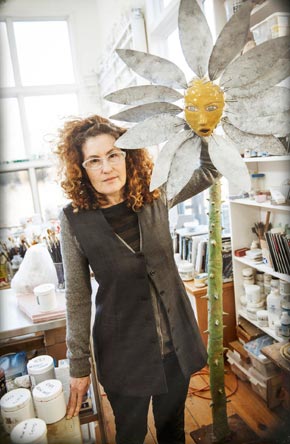 Over the past several decades Kathy Ruttenberg has moved across artistic media, working in painting, sculpture, animation, photography, and books. She has become well regarded for her ceramic sculptures, yet in her artist’s heart, mind, and hand, she is a visual storyteller. Ruttenberg’s ceramic tableaux vivante are complex compositions that tell a complete tale in a glance, preserved in color and form.

Emerging from New York’s early 1980s East Village art scene, Ruttenberg’s allegorical art contributed to the vitality of the new figurative expressionism that posed a colorful challenge to the dour minimalist sculpture and conceptual art that had dominated the art scene in the 1970s. Ruttenberg showed her work at diverse downtown venues including the Mudd Club, ABC No Rio, and the windows of Patricia Field’s fashion boutique.

Participation in a 1998 ceramics class at the famous Greenwich House Pottery has resulted in two decades of creations in clay that have been exhibited at venues throughout the world including Stefan Stux Gallery, New York; Sladmore Contemporary, London; the Dubuque Museum of Art, Iowa; the Caramoor Center for Music and Art, New York; the International Ceramic Biennial, France; the 5th World Ceramic Biennale Korea; and the 59th Faenza Prize International Competition of Contemporary Ceramic Art, Italy.

Ruttenberg’s works are permanently installed in the Tisch Children’s Zoo in New York’s Central Park and in the Mamiraua Sustainable Development Reserve in Amazonas, Brazil.  In the artist’s engagingly odd arrangements, a cast of human, animal, and floral characters have strange encounters and sometimes even merge. Just as Ruttenberg’s art works have infiltrated far-flung corners of the globe, the stories they weave infiltrate hidden corners of the viewer’s mind, brightening it with color, shading it with psychic mysteries, and taking temporary hold of our thoughts.