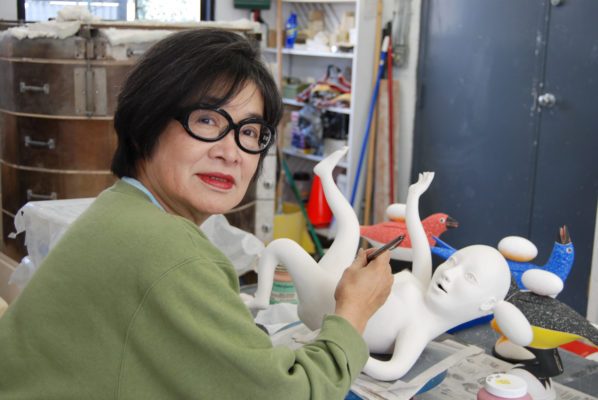 The human figure has fascinated ceramic sculptor Patti Warashina for most of her 55+ year art career. Her sustaining interest in the human figure is likely due to the fact that her own body is the closest resource from which she draws her ideas. The use of the body gives affirmation to Warashina’s own daily existence, and serves as the subject of her own “visual diary” which, for Warashina, is a reminder, reflection, and observation of personal time and the civilization in which she lives. Warashina draws from her daily life and has an abnormal interest in the absurdity and foibles of human behavior, in which her figures have become the actors in her introspective narratives.

Warashina’s early study and exploration of freely associated “realistic” figures evolved and mutated over time to simpler, reductive, exaggerated forms, with details left only for facial features and extremities to tie the body back into a sense of reality.

Instead of painting clothes on the body, Warashina prefers at this time to to minimize the surface work and use basic color in simple abstract form, as though it is “floating” over the figure, thereby giving illusion to two independent spatial realities coinciding with one another. She wants the surface to work in tandem with the simplification of body form. The abstract quality of the surface work also erases and denies the identification of time, era, and nationality of the work. Warashina hopes to speak of the universal quirks of all human nature. 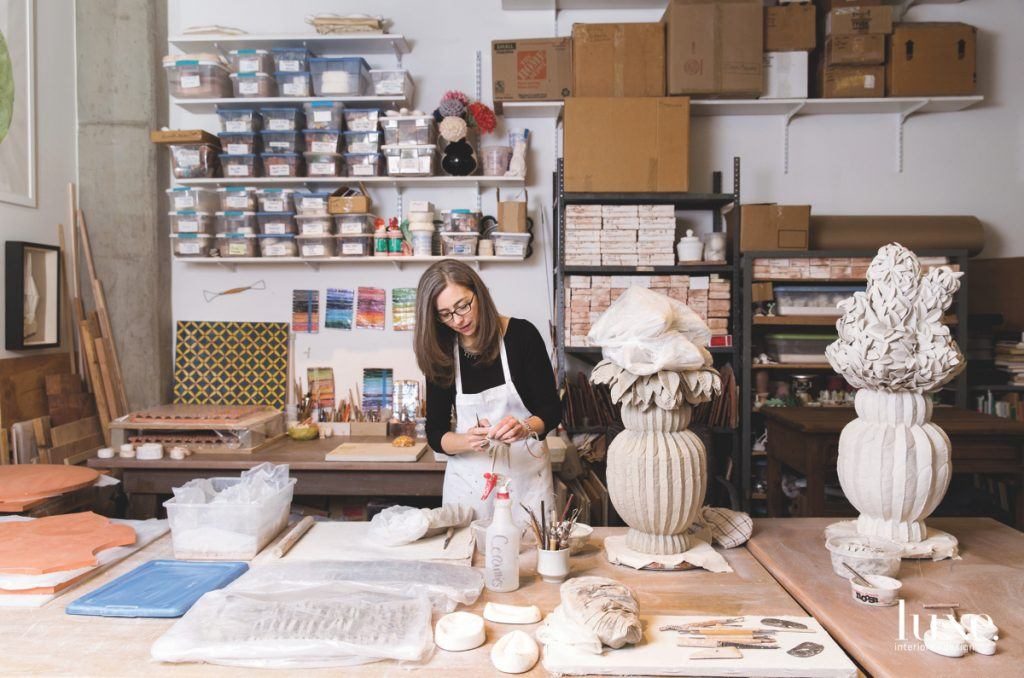 Artist Kim Dickey explores how we construct environments both physically and psychologically while in response to what is natural vs. cultural, interior vs. exterior. The artist’s intensely assembled, glazed terracotta and porcelain works consist of many thousands of unique, yet seemingly uniform elements. Dickey creates reflexive sculptural landscapes that refer to their own construction while beguiling us toward an elaborate reverie. Using gardens as her reference, ordered plots in the natural world, Dickey freely reinterprets decorative ceramic traditions such as bocage: the closely clustered, miniature flowers traditionally used in the Rococo. The effect of such elements viewed in resplendent multiples is further visually amplified by her shifting palette and ignited image-making. Dickey’s theatrical sensibility and historically inspired forms, position her sculpture in the in-between space of presence and absence, the real and the ideal while mirroring past cultures and the natural world.

Artist and Professor at the University of Colorado at Boulder, Kim Dickey received her BFA from Rhode Island School of Design and her MFA from Alfred University. She has exhibited her work in museums such as: MASS MoCA (MA), the Everson Museum of Art (NY), the Museum of Arts and Design (NY), and the Contemporary Art Museum, Honolulu (HI), among others. Dickey has created permanent installations at the Museum of Contemporary Art, Denver (CO), The Lab at Belmar (CO), for the Danish Ministry of Culture (DK), and a commission for the Denver International Airport (CO), in addition to many private site-specific commissions. She has also participated in invitationals in Australia, Germany, Japan, Korea, Sweden, Taiwan, the United Kingdom, and the United States. She has had solo shows in New York, Los Angeles, Kansas City, and Denver and shown with galleries such as Garth Clark, Jack Tilton, Pierogi, White Columns, and Sherry Leedy. Dickey is represented by Robischon Gallery in Denver, CO. 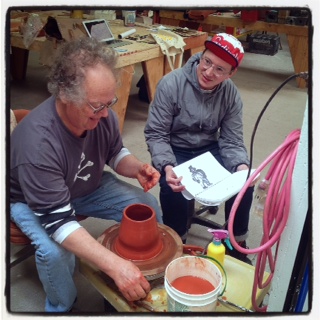 Dan Anderson is currently a full-time studio artist following 32 years of teaching ceramics (1970-2002) at Southern Illinois University Edwardsville (SIUE). He now holds the rank of Professor Emeritus. Anderson received his BS degree in Art Education from the University of Wisconsin-River Falls and his MFA degree in ceramics from Cranbrook Academy of Art, Bloomfield Hills, Michigan. He is a NEA individual artist fellowship recipient plus he has been awarded six artist fellowships from the Illinois Arts Council. An avid wood firing enthusiast, he has his own anagama wood kiln at his Old Poag Road Clay & Glass studio/home in rural Edwardsville, IL. Dan was a resident artist at the Archie Bray Foundation in Helena, MT. in 1996. Dan was also an Artist Invites Artist (AIA) short-term resident at Red Lodge Clay Center in 2010, 2012 and 2014 in Montana. His ceramics are represented at: Red Lodge Clay Gallery in Red Lodge, Montana, TRAX Gallery, Berkeley, California, AKAR Gallery in Iowa City, Iowa, Gail Severn Gallery, Ketchum, Idaho, the Works Gallery in Philadelphia, Plinth Gallery in Denver, Colorado, Schaller Gallery in St. Joseph, Michigan and with the Nevica Project in Chicago. Dan’s work is in numerous private and public collections throughout the United States and internationally. 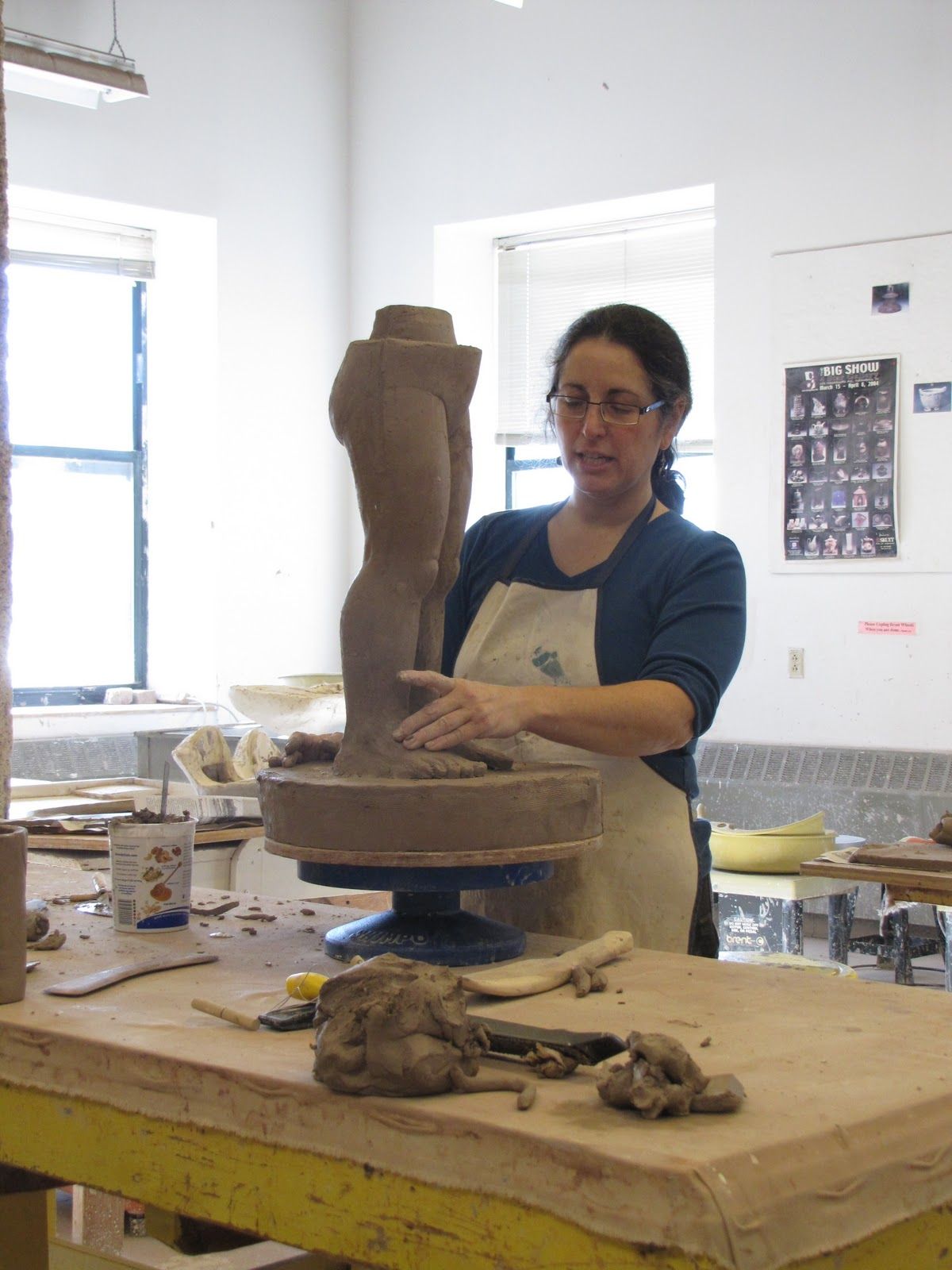 A recipient of the Massachusetts Cultural Council, American Craft Council, The Society of Arts and Crafts, Berkshire Taconic and The Blanche E. Colman Artist Awards, Consentino has exhibited widely. She currently shows work on a regular basis at Harmon Gallery in Wellfleet, MA. She has also been a resident artist at the John Michael Kohler Arts/Industry Program, Oregon College of Arts and Crafts, La Napoule Foundation, France, and Shigaraki Ceramic Cultural Park, Japan. In 2005 Cynthia completed a tile commission for the John M. Kohler Art Center in Wisconsin.  Her artist designed washroom has over 2000 relief and hand painted tile. 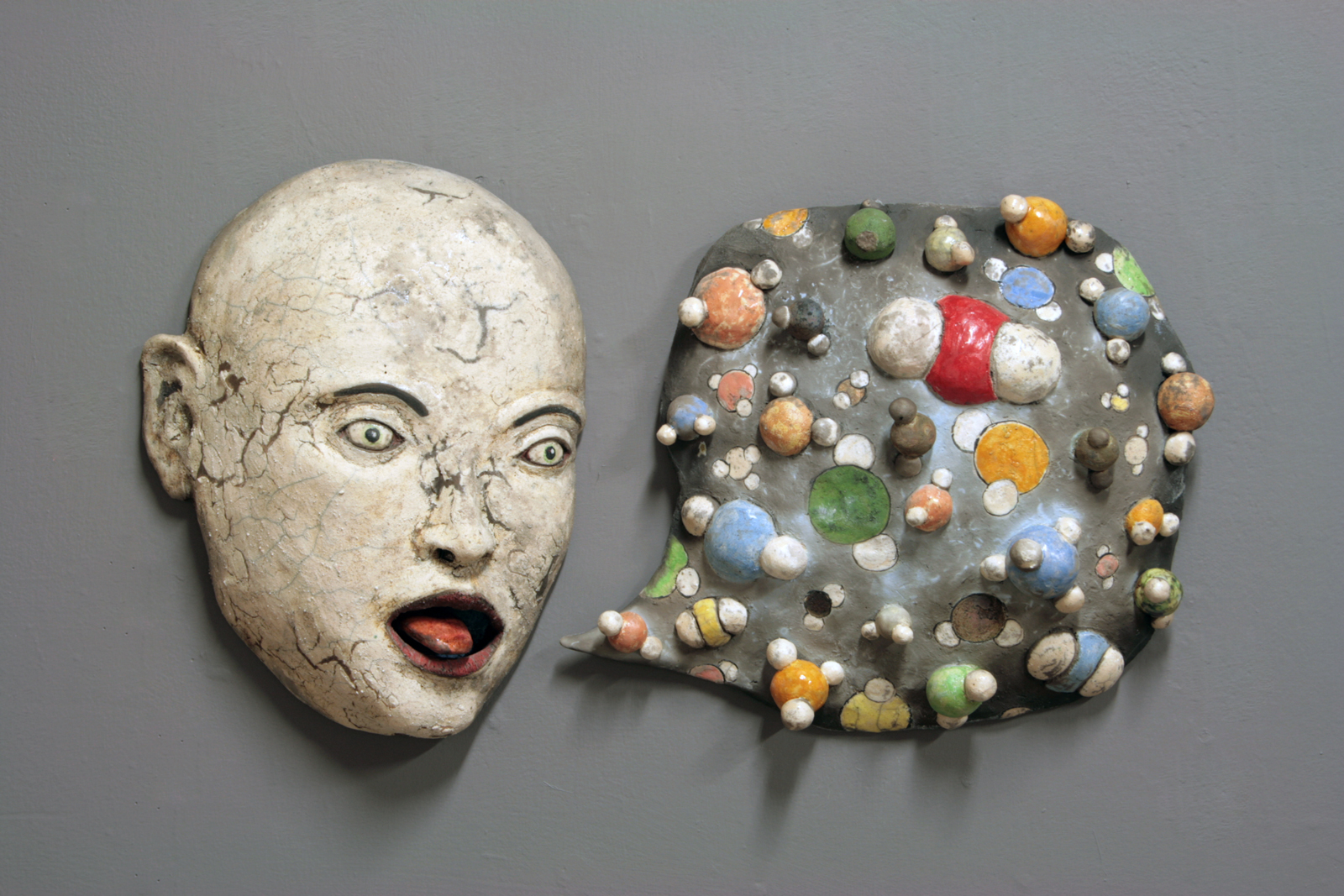 At first glance, Stephen Braun’s unique “rakued” sculptures look as though they were unearthed in an archaeological dig. That is exactly the impression he is able to give by using the raku process. With a background in anthropology and art, a central theme in his work is that humans tell the stories of their lives through what they consume and the waste they leave behind. Braun’s work beautifully depicts the residue of our myopic approach to living in the high tech/industrial age.

Braun’s work, which focused primarily on social and environmental connections, as well as political ideas, has changed from personal expression to his concerns for the future of human society and the well being of the planet and its many remarkable permutations of life. He looks at his current art as conceptual art, deriving its strength from “ideas.”

Stephen Braun received his BA in anthropology from the University of Montana, Missoula, where he also studied ceramics under Rudy Autio, Ken Little, and Dennis Voss. 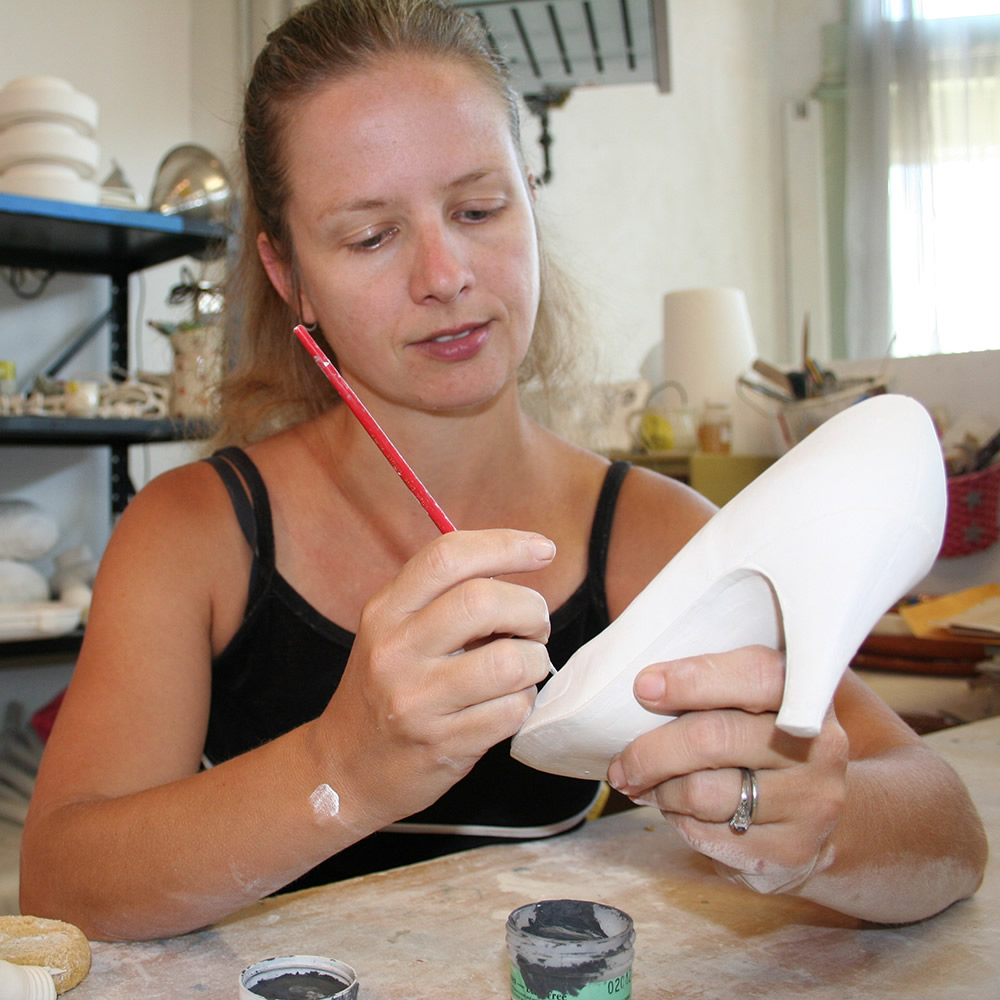 Shalene Valenzuela was born and raised in Santa Barbara, California. She received a BA in Art Practice at the University of California at Berkeley and an MFA in Ceramics from California College of Arts and Crafts. In 2007, she moved from her longtime home of Oakland, CA to participate in a long-term residency at The Clay Studio of Missoula. She currently maintains a studio in the historic Brunswick Building in downtown Missoula.

Additionally, Shalene has participated in summer artist residencies at the Archie Bray Foundation (2006) and Watershed Center for the Ceramic Arts (2004, 2011). She currently serves as the executive director at the Clay Studio of Missoula. She has taught a variety of classes at Flathead Valley Community College, University of Montana, Oregon College of Art and Craft, The Clay Studio of Missoula, Missoula Art Museum, Richmond Art Center, ASUC Studios at UC Berkeley, and CCA Extended Education. Shalene has been a guest artist and speaker at a number of art centers, colleges, and universities and her work has been featured in several group and solo exhibitions nationally.