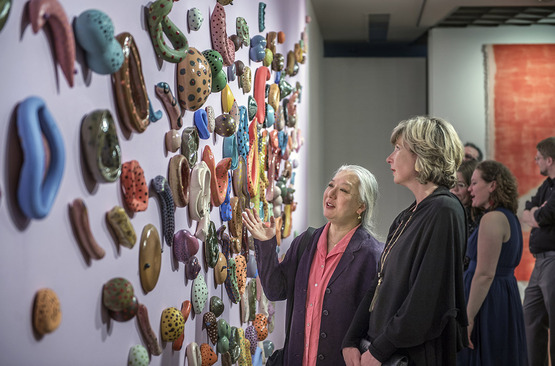 Eva Kwong was born in Hong Kong and moved with her family to New York City as a teenager. She considers art as her second language. Eva received her BFA from Rhode Island School of Design and her MFA from Tyler School of Art.

Her work at the Nature Lab at RISD as an undergrad immersed her in the diversity and similarity of objects from nature. Her lifelong interest in the intersection of the art and science of the natural world provides the conceptual framework and visual vocabulary for her compelling, colorful and sensuous organic forms. 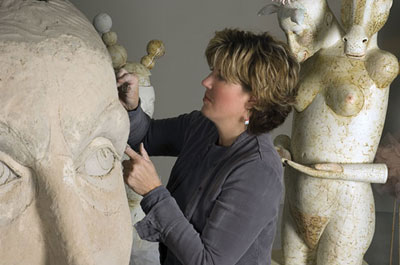 The distinctive figurative sculpture by Lisa Clague hovers between fantasy and reality –- playful, mysterious, contemplative. “My work evokes a place between the subconscious and the intangible,” she notes. “My masked figures are hybrid creatures, mistresses of ambiguity and disguise, of seduction and deception. These images, like dreams, are familiar but illusive.

The figures are rendered in white-ware and then treated with stains, oxides and wax. Metal, glass and/or wood are added components to complete the sculpture. 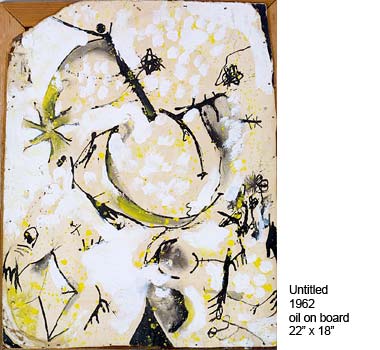 Bar Shacterman is a Northern Californian ceramic sculptor with a diverse, international background. Born in Odessa, Russia, his family immigrated to Israel when he was 6. It was there he received his training at the Academy of Art in Tel Aviv. After traveling through Europe, India and an apprenticeship in Japan, the artist and his family finally settled on the West Coast.

“A Hole in a Flute” (Hafiz, Sufi Teacher). The images, experience, fascinations that are my life move through me into something new. What I love most about the process is that it takes me to a different dimension – a place that I haven’t visited yet – technically and conceptually.

A work of art is meaningful to me when it expands my understanding of the materials I work with and the images and the ideas that live with me.

My interest in clay was originally inspired by traditional Japanese clay work. In many of the traditional works, I could feel the clay expressing itself; Nature forming around green tea. My work is also inspired by the great contemporary clay artists Peter Voulkos, Paul Soldner and Rudy Autio.

I use a gas kiln and usually fire it at cone 6 to 9. Some of my work, I fire using Noborigama (multiple chamber) and Anagama (single chamber) kilns. The unexpected coming together (jamming) of materials, traditions, and ideas to create something new inspires my work today. It is something I am interested in experiencing, creating and evoking in others.” 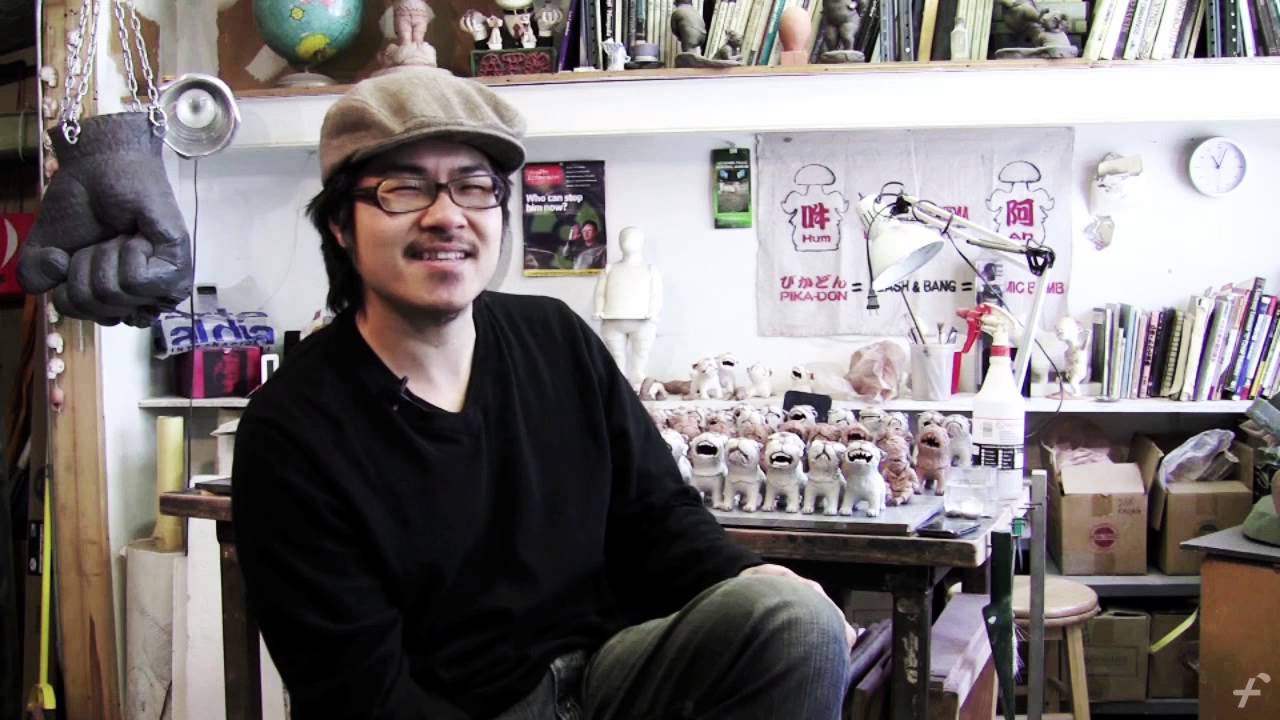 Born in Tokyo in 1977, Kenjiro Kitade moved to the U.S. when he was 13. A creative and artistically inclined child, he later received his Bachelor’s and Master’s degrees at New York University where he studied ceramics. Merely a year after graduating, Kitade began establishing an international reputation by first winning the bronze at the World Ceramic Exposition in South Korea, and later showing at the highly selective SOFA show (Sculpture Objects and Funcational Art) in Chicago. The whimsical sculpture that has won him such accllaim teems with contradiction.

From natural cold earth to gleaming high-fire surfaces, clay is the ancient anatomic medium.  It is the medium in which time stands still, ideas are frozen, and yet a civilization is represented for all eternity.  By working in clay, I have been able to explore significant issues about our antonymic existence, as Selves that can only be defined by the presence of the other.

Sheep have been used in many metaphoric expressions, proverbs and allegorical stories among different cultures.  “Obedience” and “Cowardice” are the typical imagery of how sheep have been portrayed.  The relationship between a shepherd and sheep symbolize the relationship between the rule and the ruled. In the guise of sheep, I can present human frailty.  The sheep is a metaphor and is use to demonstrate human shortcoming.

My sheep are imbued with human characteristics, feelings emotions, and often times, form.  This blurs the understanding of this easily recognizable symbol and all that the lamb characteristically means.  What you see is a creature fixed between two worlds that can now tell you a story.  I am – as Japanese who is submerged in a foreign culture-like my sheep, transfixed in a world between worlds.  I am seated in the place where I see that both worlds can peacefully coexist as one, but only with the ability to yield. 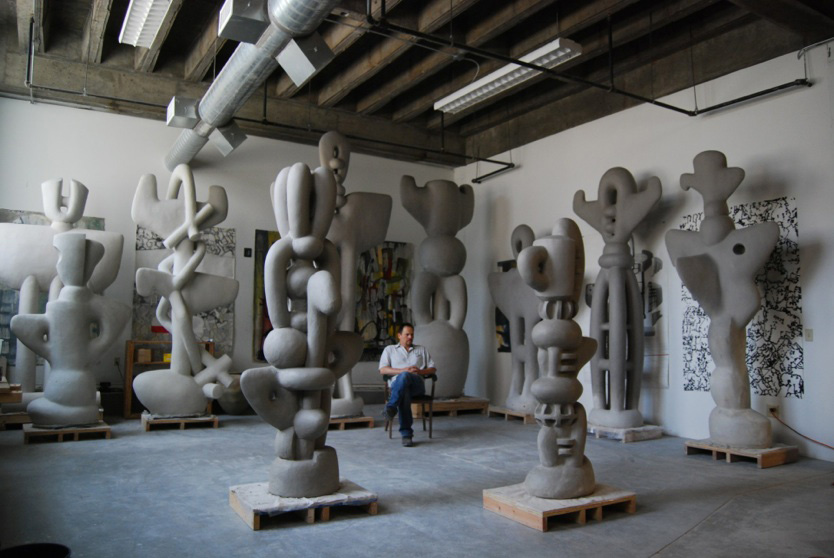 John Balistreri is a Professor of Art at Bowling Green State University, where he has been the head of the Ceramic program since 1996. He received his BFA from the Kansas City Art Institute in 1986, his MFA from Kent State University in 1988, and received the Emerging Talent Award at the 1995 National Council on Education for Ceramic Arts (NCECA) Conference. Balistreri also serves on the Board of Directors of the Archie Bray Foundation. His articles have been published in Ceramics: Art and Perception, Ceramics Monthly, and American Craft and his work has appeared in many books on ceramic art.

He has conducted over fifty workshops and lectures throughout the United States and China, has had nine solo exhibitions of large-scale ceramic work, and has participated in many national and international group exhibitions. Balistreri’s work is also included in numerous corporate, private and museum collections, including the Fredrick R. Weisman Art Museum (Minneapolis, MN), The American Museum of Ceramic Art (Pomona, CA), The Canton Museum of Art (Canton, OH), The Daum Museum (Sedalia, MO), The American Ceramic Society (Columbus, OH), The Shiwan Treasure Pottery Museum (China) and the Foshan Ancient Kiln Museum (China).

Balistreri is best known for his large-scale ceramic sculpture as well as his innovations using digital technology to create ceramic objects using ceramic 3D printing techniques. He has been awarded two patents related to this research. 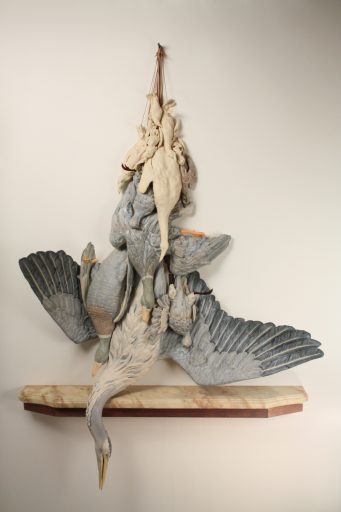 Dirk Staschke’s work reinterprets Vanitas (“vanity”) still life paintings of 16th-century Northern Europe, which recognize the fleeting nature of life and question the futility of earthly pursuits and acquisitions. Using sculptural form instead of paint, Staschke employs a transgressive beauty that contradicts commonly held convictions about what makes something appealing. Playing on the human impulse to own and consume, his work uses symbols of longing to explore the complexities of human desire. His work has been included in the collections at The Birmingham Museum of Art, The Smithsonian, The International Museum of Ceramic Art, among others.