Yoshio Taylor and His Sculptures of Scale

Yoshio Taylor and His Sculptures of Scale

For the first time in over a decade, esteemed sculptor, Yoshio Taylor, will be featuring his large-scale sculptures in a major exhibition of his work.

Alongside Pat Mahony, Yoshio Taylor is going to be featured in an upcoming exhibition at the John Natsoulas Gallery. This renowned sculptor has spent over 3 decades as an artist and professor at Consumnes River College. Known for his large-scale installations and colorful pop art figures, Taylor has gained a following by those that favor the bold. Yoshio famously never shies away from color and expresses his forms with glazes and pops of bright hues. His newest work reminds us of his affinity for depicting the human body using complex sets of symbols and archetypes. His works addresses cultural constructs such as history, environment, community, and healing. Using form and iconography, he crafts a multi-layered narrative that makes the viewer see through the imperfection to the grace and beauty underlying our world. 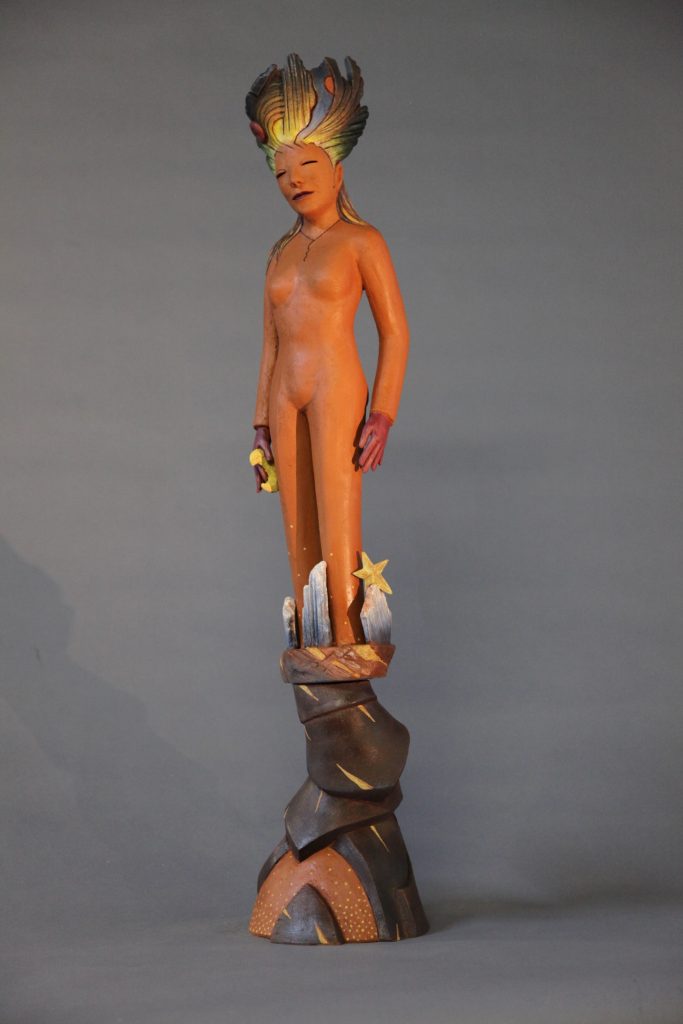 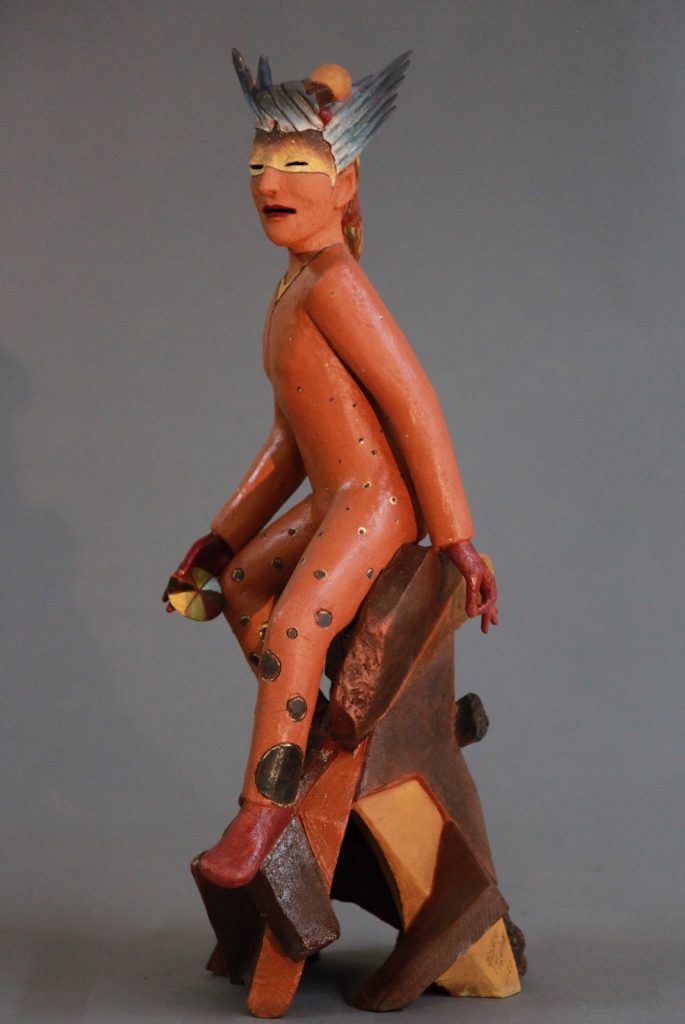 “Art should reflect the cultural personality of the surrounding communities.” 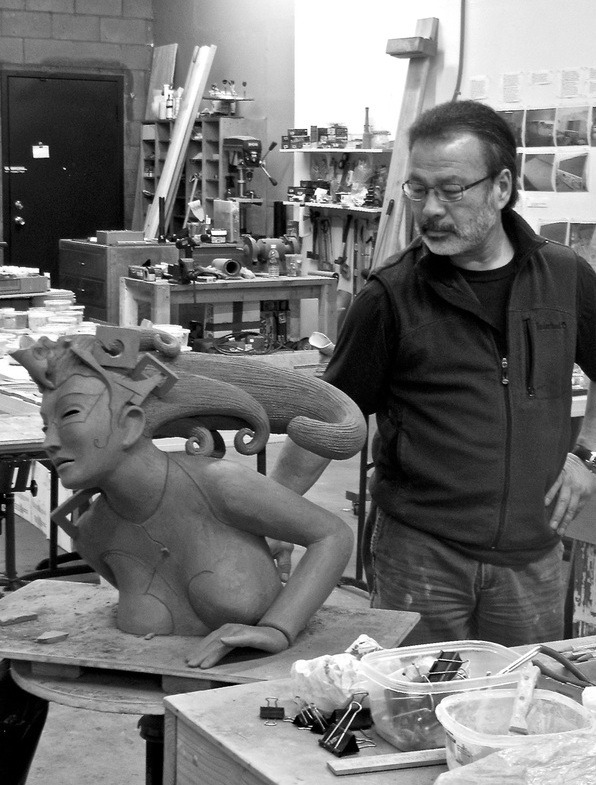 Known for his large-scale installations, Yoshio Taylor has been commissioned for various public art projects throughout Sacramento and Yolo County. One such notable project is his three story mural, Resurgence, created in 2010. The mural was commissioned to be installed at the University of California, Davis, Medical Center’s Surgery and Emergency Services building. Taylor knew he wanted to use imagery that would bring patients, concerned loved ones, and overworked medical professionals a sense of peace and strength. The vibrant combination of mythical flora and medicinal fauna results in an ethereal place of respite. Today, the cascading waterfall measures 17 feet wide and 32 feet high, greeting hundreds of visitors each day.

Of course, this installation was no easy feat. Over the course of a year and a half, Taylor took on the task of designing, carving, glazing, and firing over 500 square tiles. Once the tiles were ready to be installed, a professional tile setter and his assistant worked for 5 days mounting each tile individually. When all was said and done, the Resurgence project used 9,000 pounds of clay, took nearly 9 months, and is one of the most significant pieces ever commissioned by the health services system. 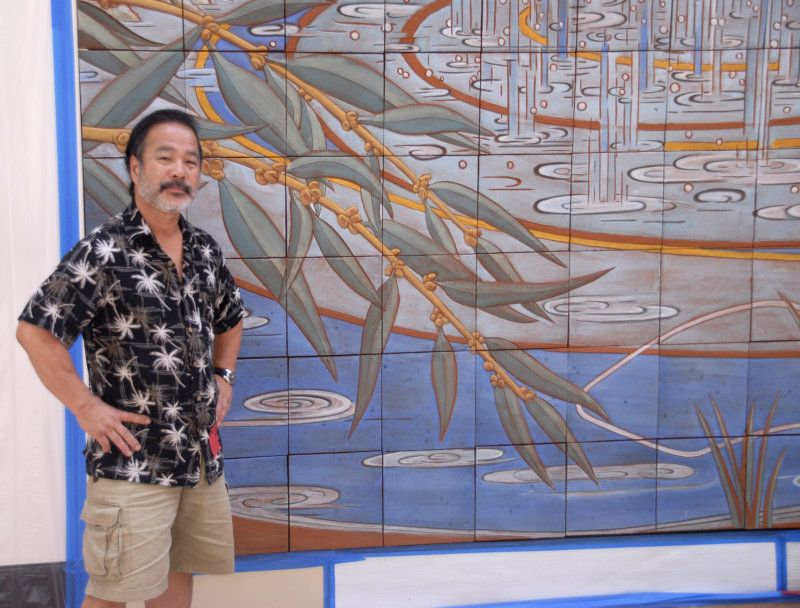 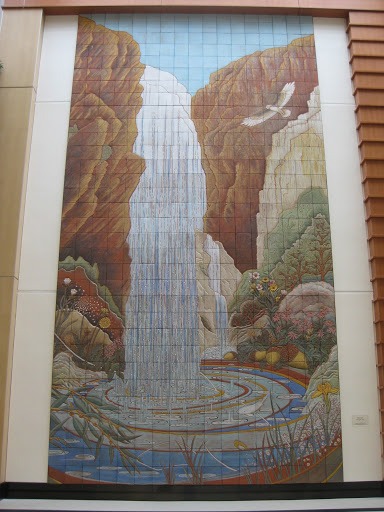 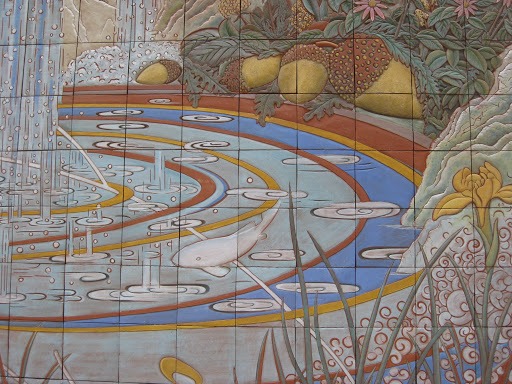 “I needed to create something that calms people down in a a way that soothes their soul and mind. I thought about doing a waterfall, not just because of the calming water but because it has strength as well.

Yoshio Taylor was born in 1945 and was primarily inspired creatively by the 1960s growing up. Art turned into a vehicle for dogmas and other agendas, with Pop and Minimalism appearing concurrently as the most significant art movements of the decade. Pop Art in New York city embraced the culture of mass media and mass consumerism, with Artists such as Andy Warhol, Roy Lichtenstein and Tom Wesselmann getting stimulated by television, comic strips, billboards and other products of the rise of Capitalism for their artworks.

On the other side of the country, the West Coast in California, the first features of what would be known as Conceptual art were developing. The astronomical impact of the 1960s was truly sensational across the globe. Representative of a time inspiring both hope and anger, the 1960s triggered an outburst of new ideologies and movements, truly sensational and spectacular. Historically set in the context of the Cold War, which would have a highly powerful impact globally, mainly defined by the Iron Curtain separating Europe both physically and spiritually, and drastically marked by the construction of the Berlin Wall in 1961. The 1960s re-defined all pre-existing expectations on gender, race and justice, questioned education as well as morality and selfhood – for instance through the civil rights movement and second wave of feminism, as well as student political uprisings.

The significant boom of mass consumerism also defined the era, generating new trends in marketing and advertising. Minimalism developed the crucial idea that art should exist in its own reality, and not try to represent the real world. Born of a desire to obliterate all pre-established notions about art, Minimalism turned into a radically progressive movement, highly influential worldwide, with artists such as Frank Stella, Donald Judd and Dan Flavin as key actors. Minimalism became influential through the works of artists such as Victor Vasarely and Bridget Riley, while Pop art was a fundamental by-product of the latter, simultaneously critiquing and glorifying popular culture.

Morris Louis, Kenneth Noland and Helen Frankenthaler were artists who sought to delve into some of the most fundamental philosophies of Abstract Expressionism, while eliminating the expressive and highly personal aspect it would often associated with it. This led to the creation of Colour Field painting, deeply identifying with Minimalism. The iconic contemporary art movements that echoed through the wave of radicalism of the 1960s also had their own distinctions and scopes, particular to different regions or countries. Spatialism, for example, was founded in Italy by Lucio Fontana and Piero Manzoni, and its ideologies adopted by the Zero group in Germany. Throughout Europe, the ideologies of Existentialism strongly influenced artists like Francis Bacon and Alberto Giacometti, who strived to depict the raw human emotions often connected to reflections on death and the haunting anxiety of the meaninglessness of life. 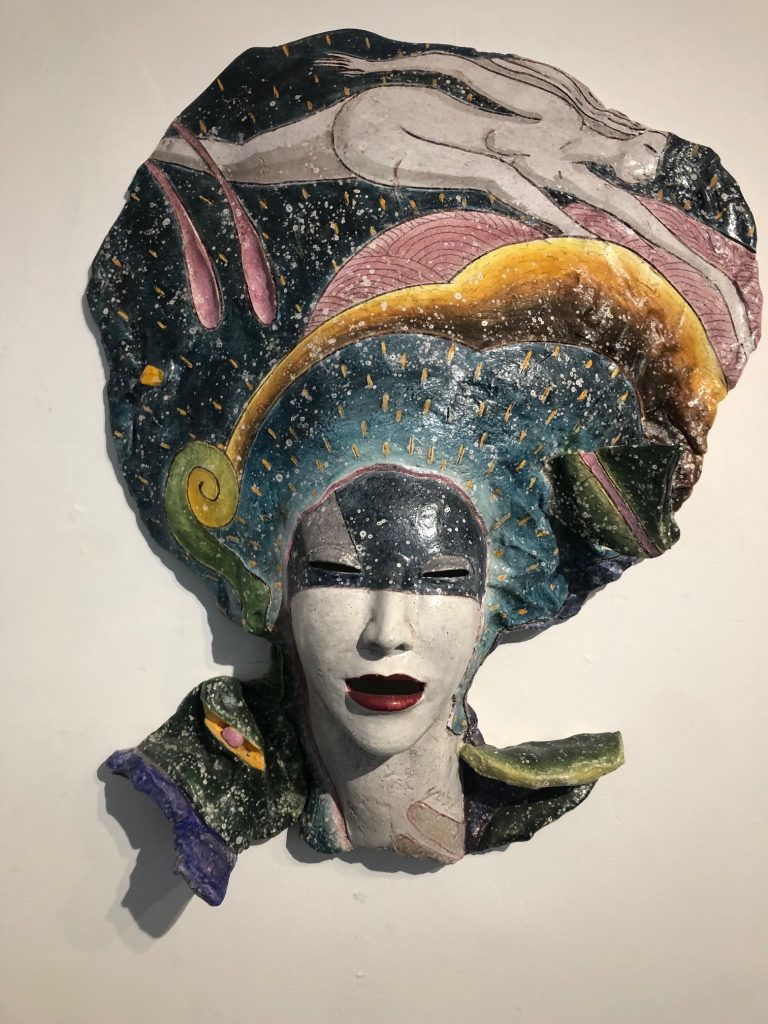 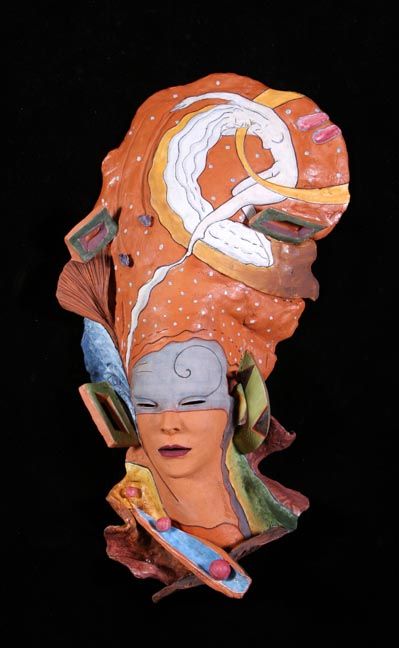 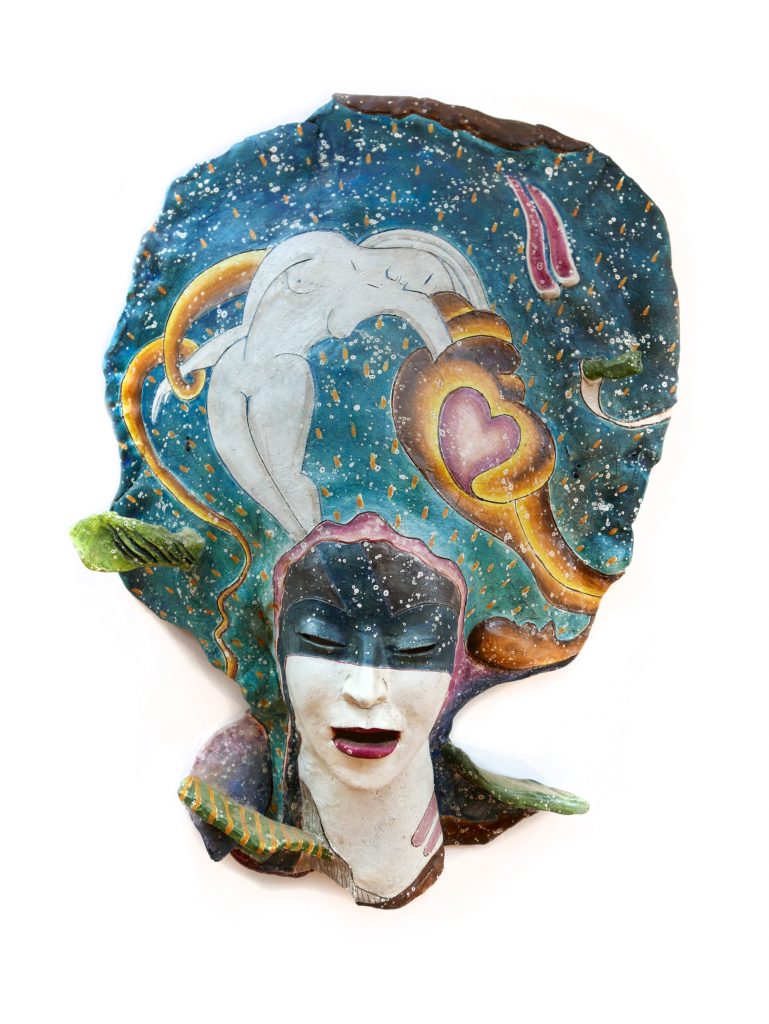 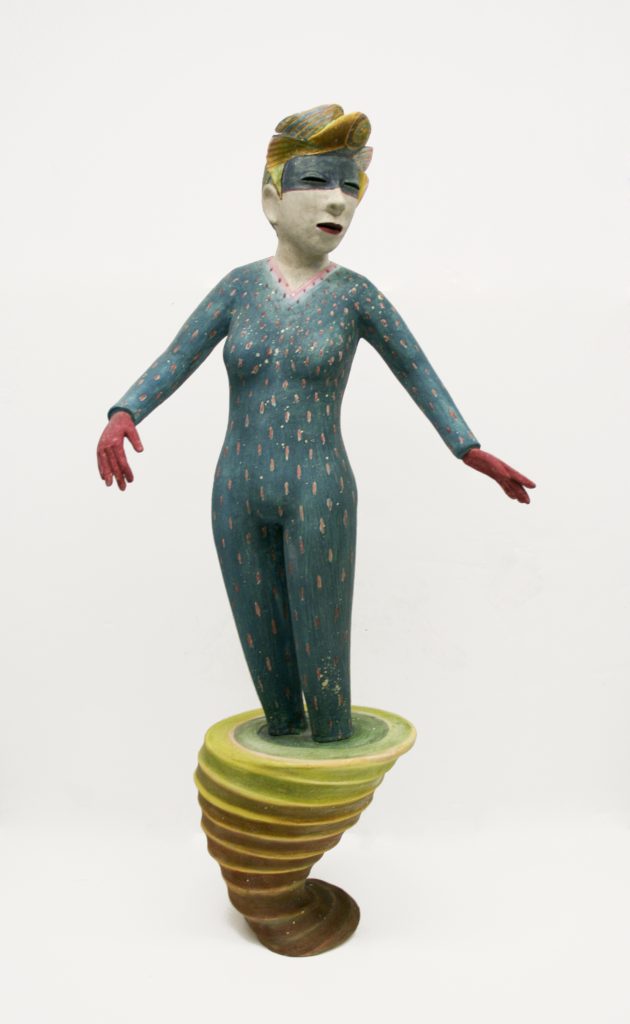 Yoshio taylor has created works ranging from ceramic pottery to human figures to public art projects. His work uses his Japanese sensibility of form with abstract expressionism and surrealistic imagery to create sculpture that expresses his multiple viewpoints of the aesthetic. To study his creations is to read a narrative about a Japanese myth or experience a sensuous and spiritual dream, while the themes express the feeling of reaching out, balancing, being trapped, and escaping,. As a result the viewer begins a meditative, energy-filled journey through progressively more complex interrelationships of meaning and ideas.

Starting with form and narrative he develops his ideas in a spontaneous manner. His sculptural interests were encouraged by Ruth Rippon and Peter VandenBerge when he attended California State University, Sacramento in the late 1970s, for a Masters Degree in Art. He gained further artistic knowledge and training in Kyushu, Japan, with master potter Jun Kozuru. When Taylor returned to the United States he was accepted in the Master of Fine Arts program at the University of California, Berkeley. At USB he worked with Peter Voulkos who emphasizes using clay with the Japanese attitude of Iga, which uses the material in a spontaneous and abstract manner.

Reading the images on the figures, Taylor pulls the viewer from a study of form inton another layer of meaning where narrative takes over. The narrative may be a Japenese myth or a surrealistic dream in which the viewer is given glimpses of what may be or will become. His newest exhibition presents his current efforts to express his thoughts and ideas in clay. He constantly explores his relationship with materials and creativity. As a result, Taylor creates ceramic forms that depict his complex and personal experiences in the material and spiritual realm. By adding line and color, Taylor brings his sculpture to another level of meaning and expression. Besides the form of the work, te lines and colors draw rhe eye in and out of the clay figure while emphasizing images and geometric forms on the figure’s surface. Don’t Look Back illustrates how line and color work with form to create a unified vision of the aesthetic. 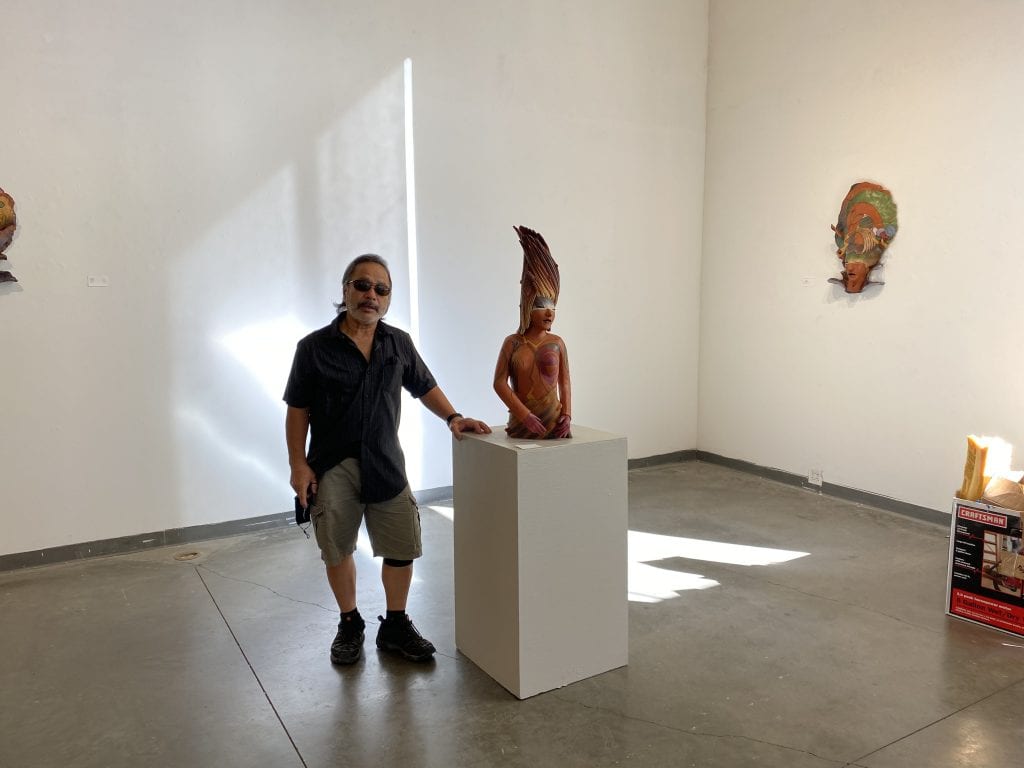 Yoshio Taylor setting up his exhibition at John Natsoulas Gallery 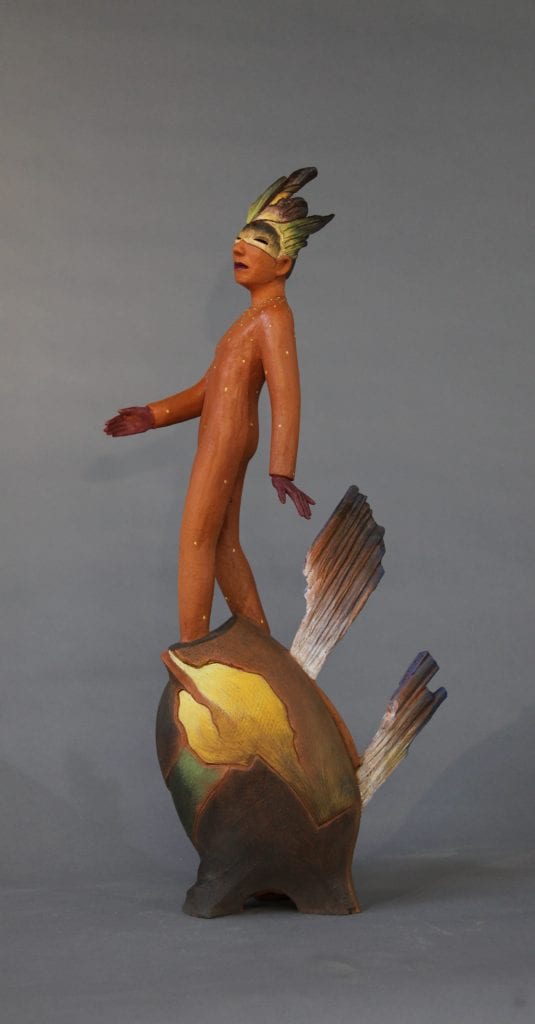 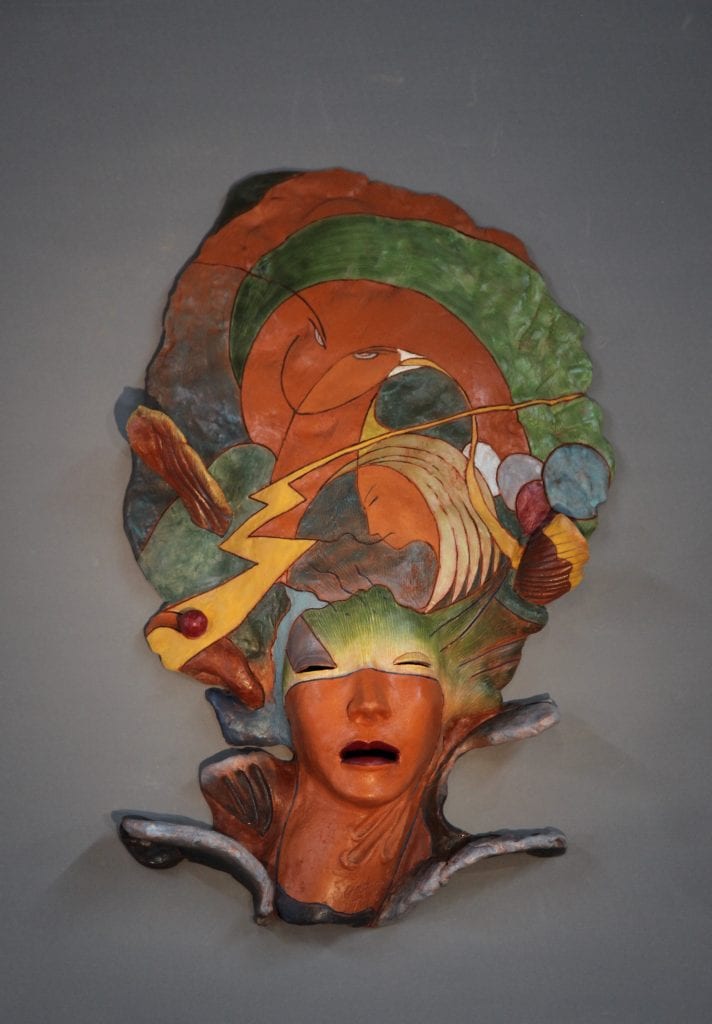 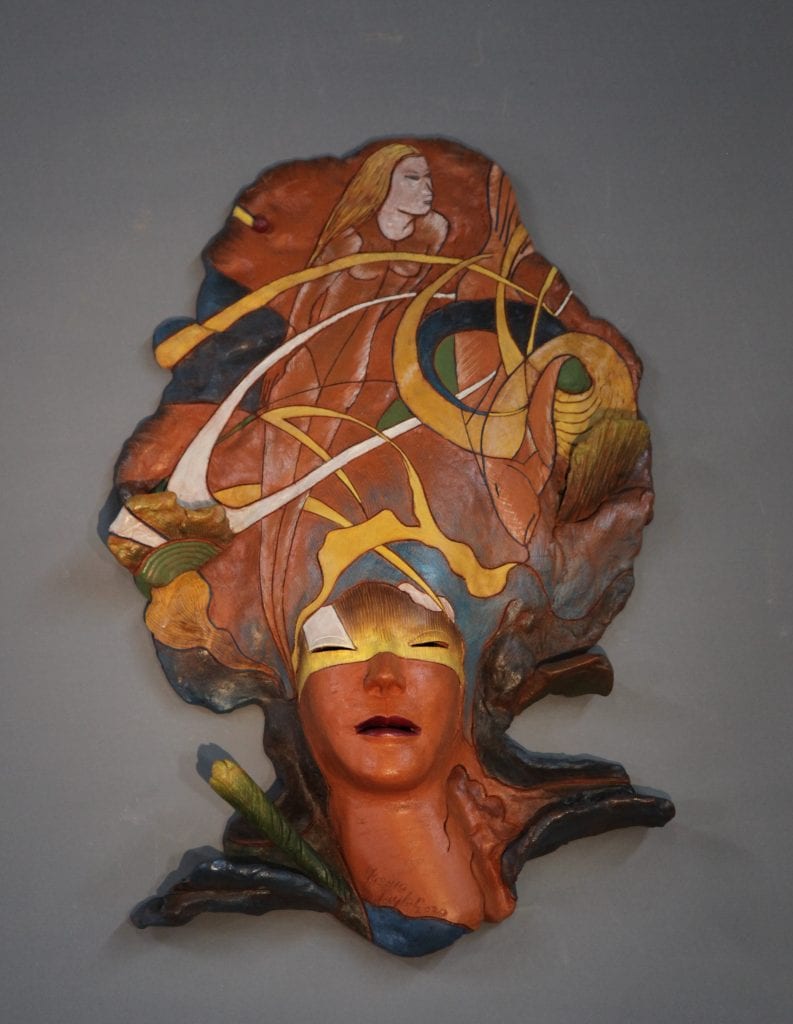 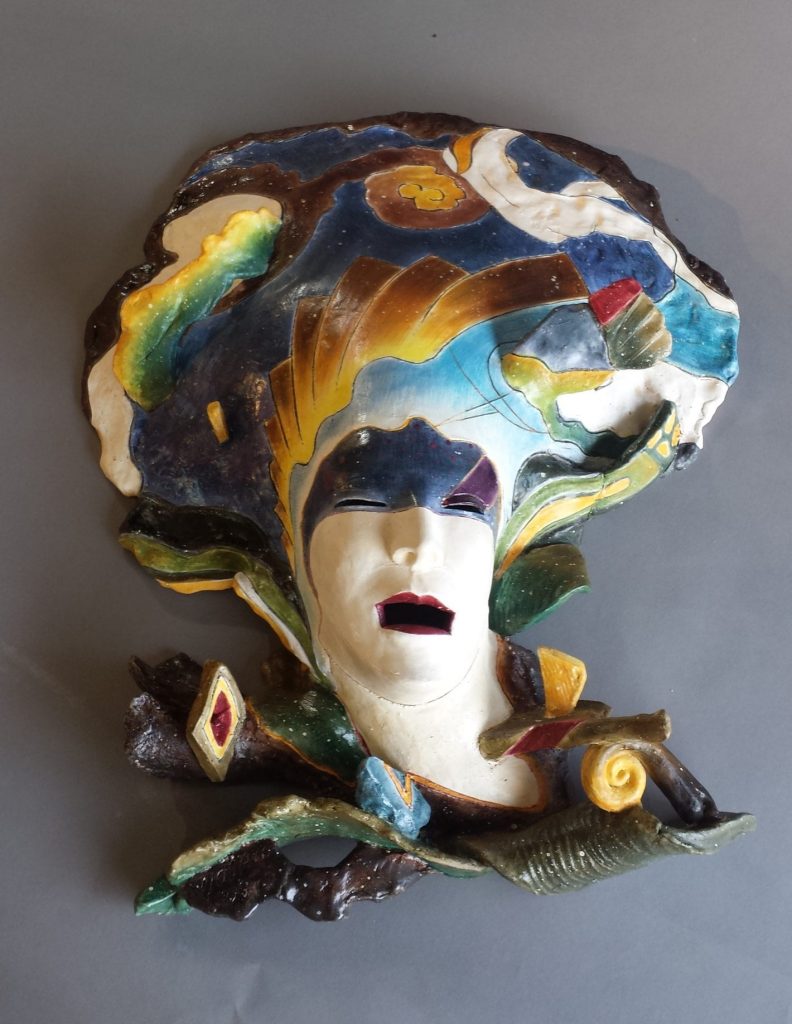 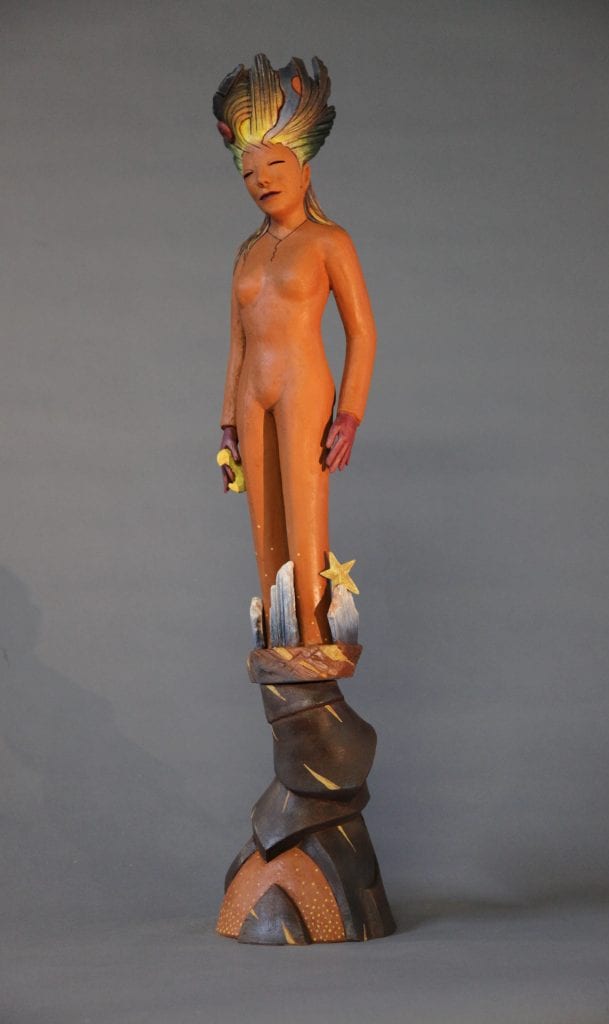 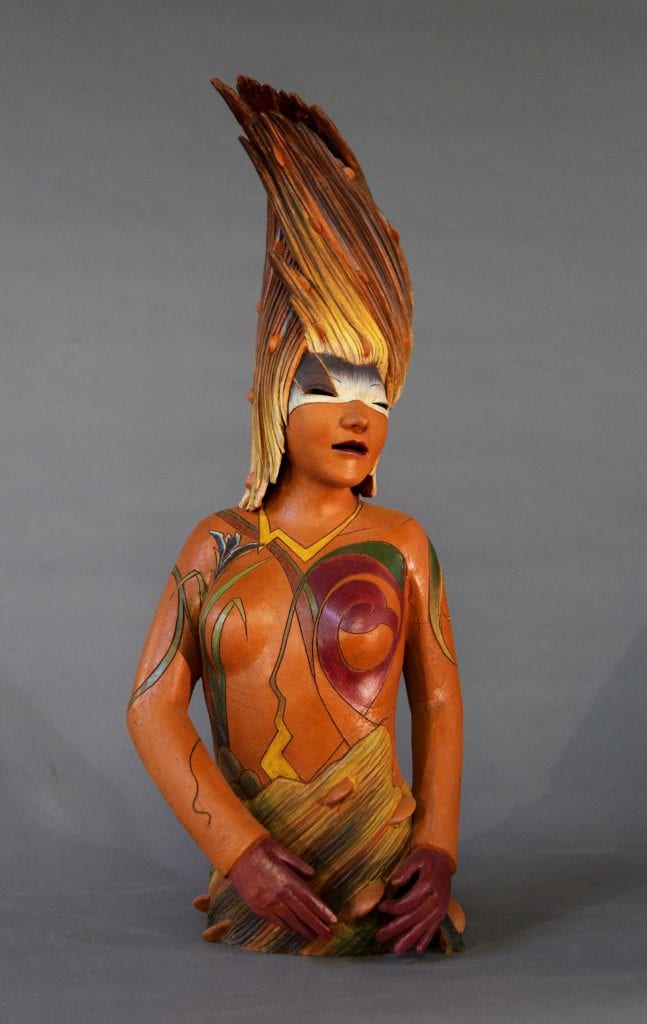 To see the profile of Yoshio or other ceramic artists, click the link below.