Margaret Keelan’s earliest work is inspired by the old world of ancient Greece where terracotta and marble sculptures emerged as a form of high art. During the Archaic period, Greek sculptors such as Myron and Phidias created realistic, life-sized sculptures that “glorified the human figure and focused on perfecting the human form”. Amongst the sculptures made during this period, The Peplos Kore is a notable highlight for its detail and abstract realism in conveying the human figure; a figure of a woman sculpted in Parian marble stands upright and is draped in a dress with “perfect symmetry and an unearthly expression”. In 1987, Keelan used clay to create Angela, marking her first sculpture that emphasized the human figure through elements of abstract realism. A naked figure of a woman gazes into the distance with her arms crossed but the figure is only completed from the waist up and the eyes were yet to be developed, which appears to be a homage to the archetypal sculptures made during this period.

The visual and stylistic elements of Keelan’s work developed in the early 90s and became more akin to the figures of the Hellenistic period, however. The later emphasis on naturalistic bones and accurate human anatomy–which had not yet developed in the Archaic period–is seen in details such as the knees, elbows, and other critical joints. Anatomical features from this period appear to be chiseled rather than sculpted by hand, a characteristic of more ancient traditions. During the Hellenistic period, sculptors methodically integrated three characteristics into their work: “expressive movement, realistic anatomy, and ornate details”. In Antonio Canova’s The Three Graces, three naked figures of women with highly realistic facial features, muscles, and joints are seen embracing one another. A thin, dainty scarf unites them together as they stand on a marbled pedestal. In 1994, Keelan created Woman with Boars’ Tusk, in which she assimilated similar characteristics – a figure, ambiguous of gender, is seen holding onto the drapes of their dress and also stands on an adorned pedestal. Using clay, Keelan sculpted anatomically correct features covering even the finest details, such as the natural undulations of the arm and neck muscles. When the figure is properly lit, shadows are cast upon the figure to which even more subtle features surface, such as the veins of the neck and clavicles of the shoulders.

In 2002, Keelan created her first doll-like figure that could not be more drastically different in texture, color, and form in comparison to her previous works. Instead of forming elegant, marble-like life-sized figures, Keelan constructed Tribal Doll, a two-foot doll completely devoid of realistic anatomical features. Although the texture of the face and hands appear marble-like, they seem to be deteriorating from prolonged exposure to weathering, giving an appearance of decayed ancient marble. Adopting the technique of trompe l’oeil, Keelan skillfully managed to use clay to make the arms and legs mimic the texture of freshly cut and polished bark. The most riveting component of this figure, however, is how the surface of the bodice bears an accurate resemblance to distressed wood. The upper body has been sporadically chipped of “wood”, giving the illusion of deeper layers of bark underneath. Perhaps, the works Keelan created during this period were a metaphor for the death of the early classical period.

From 2002 onwards, Keelan fully adopted and integrated the usage of trompe l’oeil into the rest of her works. She incorporated doll-like facial features that are akin to the dolls of the 19th century. Antique dolls of that time were youthful-looking and made with delicate features such as full, blushed cheeks, large blue or green stationary eyes, and a petite, brightly pink mouth with outlined lips. In Flow, Keelan integrated all of these characteristics into the face of her figure in conjunction with the appearance of deteriorating wood. Consequently, the figure’s face has been almost destroyed and stripped of color, but the youthful facial features remain. 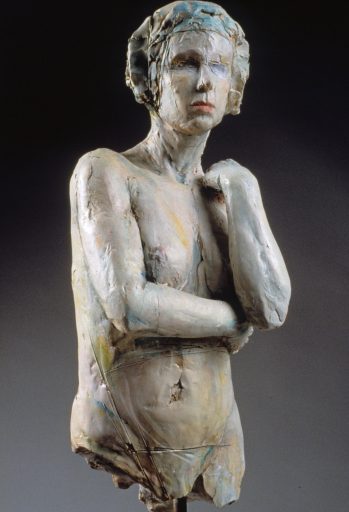 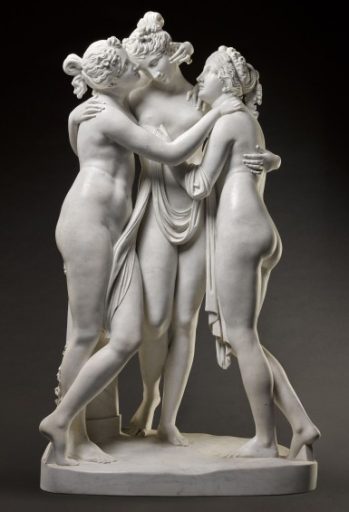 The Three Graces, 1815, by Antonio Canova 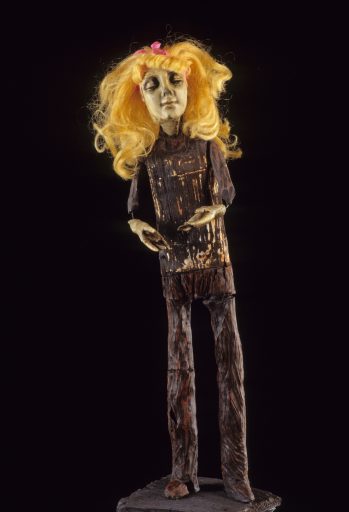 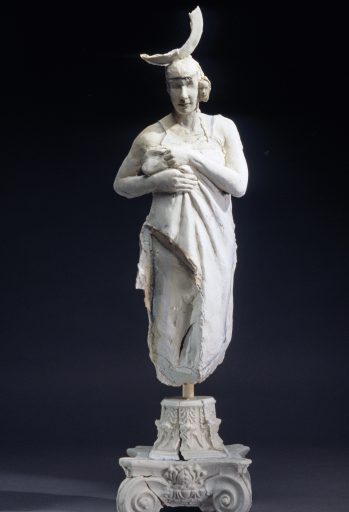 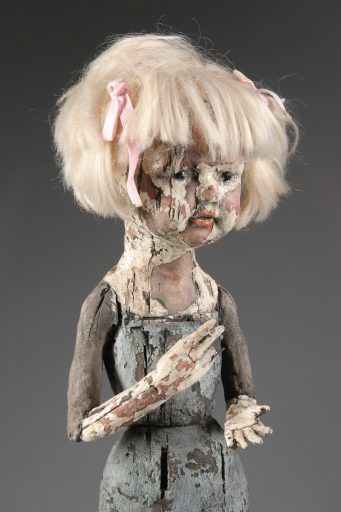 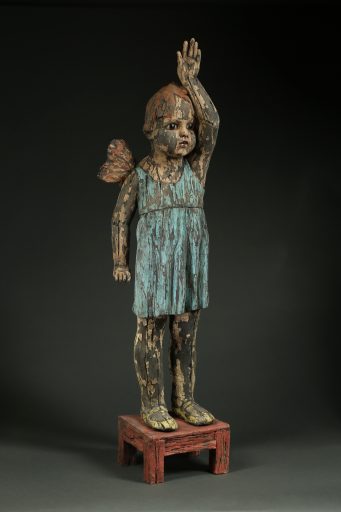 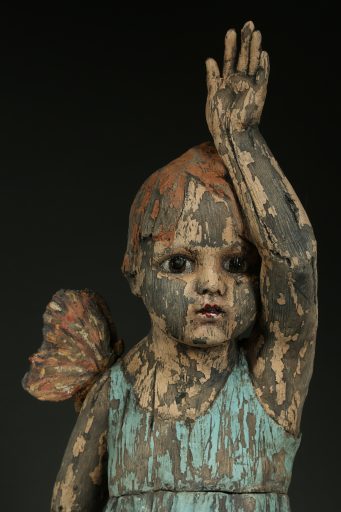 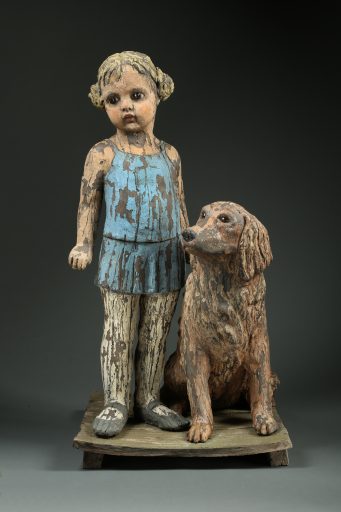 Margaret Keelan’s recent body of work is a delightful assemblage of doll-like figures and animals. From 2011 to 2019, Keelan established her final form and style by merging animals and insects into her subject matter, refining the physique of her figures, and integrating the usage of primary colors. Today, Keelan is an impressive contributor to the trompe l’oeil art that emerged during the Renaissance. Her works are an optical illusion of form that uses ceramic to convincingly mimic the appearance of wooden dolls that have been weathered through time.

During the Renaissance, Italian painters such as Andrea Mantegna and Melozzo da Forlì deceived the viewer’s eyes by applying a newfound perspective into their paintings. By decorating ceilings in fine detail, they conjured the illusion of great heights and an infinite space ultimately paving the way for contemporary artists of trompe l’oeil such as Marilyn Levine, Keelan’s teacher and colleague during the 70s. Levine utilized ceramic art to create leather handbags, garments and briefcases, holding the belief that they are “records of human experience and activity”. It was during this time Keelan became greatly influenced by Levine, which began an association of trompe l’oeil art that would last for the rest of Keelan’s career.

Beginning in 2011, Keelan thoroughly developed the physique of her figures by integrating childlike bodily features such as bulbous limbs. The volume of the hands, arms, calves, and body in proportion to height accurately resemble brown adipose tissue seen in infants, also known as “baby fat”. Keelan also maintained in her figures the youthful facial features of dolls from the 19th century. Further, she applied opaque, vibrant primary colors into the dresses of her figures as seen in Girl Holding Flowers, Lucy, and Navigator. There is a striking contrast of texture in comparison to Keelan’s innocent subject matter.

In Feeling The Air, paint is peeling throughout the crevices and concaves of the childlike ballerina, exposing various layers of distressed surface underneath that materializes as weathered wood. While dolls from the 19th century have deteriorated through time, Keelan deliberately chooses to give new form an appearance of decomposition. Her work simulates forgotten objects of the past and evokes a sense of preserved history. The dolls appear as if they were recently salvaged from a junkyard or an antique store of collectible dolls from centuries past.

During this period, Keelan also integrated various kinds of insects and animals into her work in conjunction with the appearance of deteriorating wood, ironically presenting themes of life and death, age and innocence, and the passage of time. She works with real-life animals by using her dogs and insects within nature as models. She first photographs them, then uses these photographs as references to guide and build her work. To Keelan, signs of decay are “a metaphor for living life”. Perhaps the animals seen in Keelan’s work are a metaphor for how animals in the natural world, too, will wither one day.

Directly taught under Joe Fafard and Marilyn Levine, Margaret Keelan continues their legacy as the Associate Director of Sculpture at the Academy of Art University in San Francisco, CA. Her love for ceramics resides in the flexibility and forgiving nature of the medium. She revels in the idea that clay can instantaneously give shape to her ideas, which are always three dimensional. Her technical mastery of the trompe l’oeil so convincingly mimics the texture of wood that even carpenters are in disbelief when viewing her works.

Enigmatic, introspective and engaging, Keelan’s sculptures are rich in historical context, a reflection of her psyche and overall, delightful works of contemporary art to experience.

To learn more about Margaret Keelan, purchase her book here.