Finding inspiration in the unconscious mind

Lisa Clague frequently contends that she often dreams in series for months at a time. Her expanse of work deals with personal journeys through these boundless dreamscapes. Dreams have long proved a fertile ground for human creativity and expression and no less so than in ceramics, giving rise to some of its most arresting images. In addition to the many and varied dreams so important to religion and myth, there has emerged, in the last few centuries since the birth of Romanticism, an exploration of the more personal dream. This is no better exemplified than in Clague’s sculptures. She frequently cites the dreamscape as a breeding ground for inspiration to her strange, often disquieting work. With its link to the unconscious, dream-based art has proved the perfect vehicle for artists like Clague; artists looking to surface that which lies submerged— desire, fear, ambition— and to bring to light the truth that the waking mind keeps hid.

Art based on dreams is necessarily limitless- creatures, landscapes, and objects are formed. Clagues’ commitment to the strange and wonderful is admirable. In creating dream-based art, challenges have arisen for Clague. One, namely, is marketability.  Though the work can be so unique and personal, it limits the scope of buyers who often gravitate towards muted tones or simple themes that can sit quietly in the background of a living room. Claugue’s work, however, does not adhere to any norms nor play nicely with others. It commands attention. It is bold and eery, peculiar and surreal. It is marvelous in the literal sense— the pieces demand to be marveled at.

Despite this challenge of marketability, Clague has attracted a cult-like following. What should have been a hindrance, could very well be her work’s most attractive quality. It attracts customers, not in spite of its strangeness, but because of it. Upon observing a piece like, sndkjfna, the viewer attaches a meaning to make sense of it, as it’s human nature to rationalize and contextualize. This process forges a connection between audience and art. The personalization stems from the act of observing.

An additional challenge from dream-based art is the act of giving form to something so visually intangible as a dream. This challenge has been taken up in many ways through the centuries, but never exactly like Clague. More often than not, dream-based art depicts the sleeping body itself, with the dream element incorporated in a variety of ways. Artists like Henry Fuseli or Antonio de Pereda show the sleeper in a room with the figures of the dream, or have the dream sequence appear in a totally separate part of the image, as if projected on the walls of the sleeping mind. This practice is much easier to achieve in paintings as the landscape is easier to depict more fully. Clague uses a different approach entirely, one which looks past the sleeper to focus solely on the imagery of the dream itself. In this process Clague gives a more honest impression of the strangeness and otherworldliness that so often characterizes the dream experience.

Carl Jung is a pervasive influence on her dreamlike work. She says: “In Convoluted Dream I was dealing with Jung’s collective unconscious, the animus and anima. Jung describes the animus as the unconscious, masculine side of a woman, and the anima as the unconscious, feminine side of a man.  The double heads were created to illustrate this kind of tension in all of us, the archetype of self.  In addition, the double heads portrays two sides of myself, one; the stoic mid-western side with my head held high, two; the fragile, uncertain frightened side.  Often these sculptures had real doll or taxidermy eyes in one head, depicting one’s conscious reality. The other head would have sculpted eyes, describing the unconscious dream state.”

“Attempting to reach a place within that is endlessly intrigued with the subconscious layering of the psyche. My work has followed dreams that compress and heighten reality. Some bring on fantasy or fear, fusion of overlaying images reflecting desire, anxiety and the poetic lure of many inner worlds.” 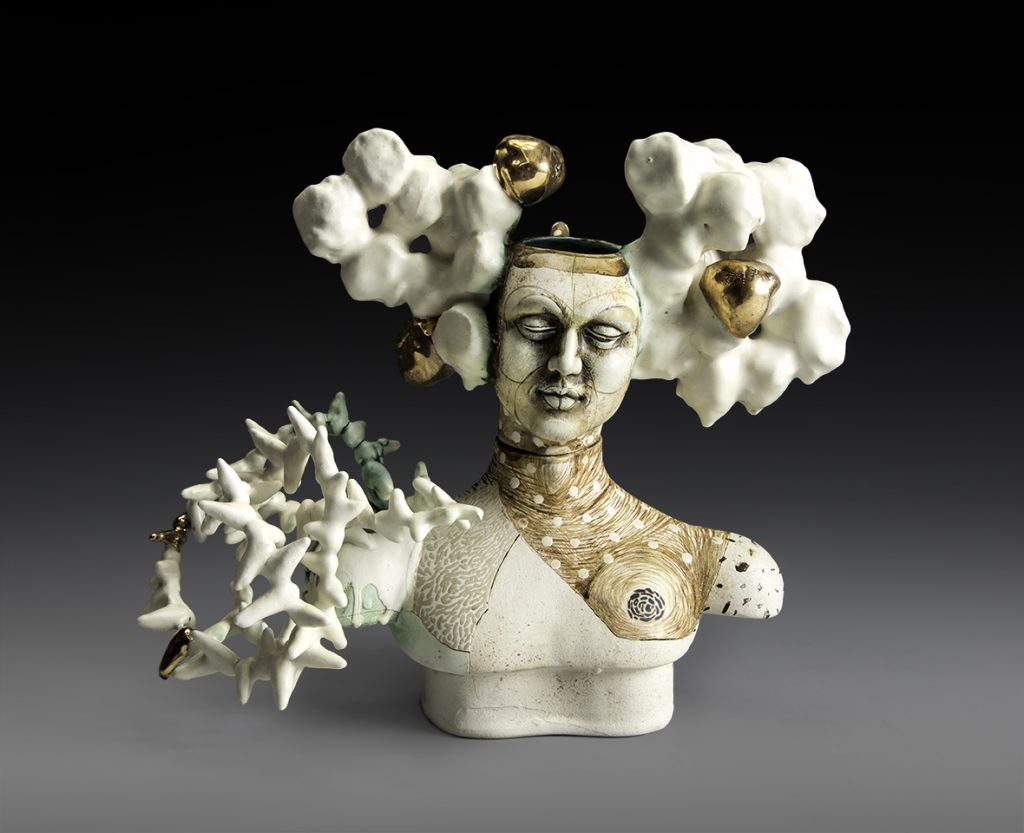 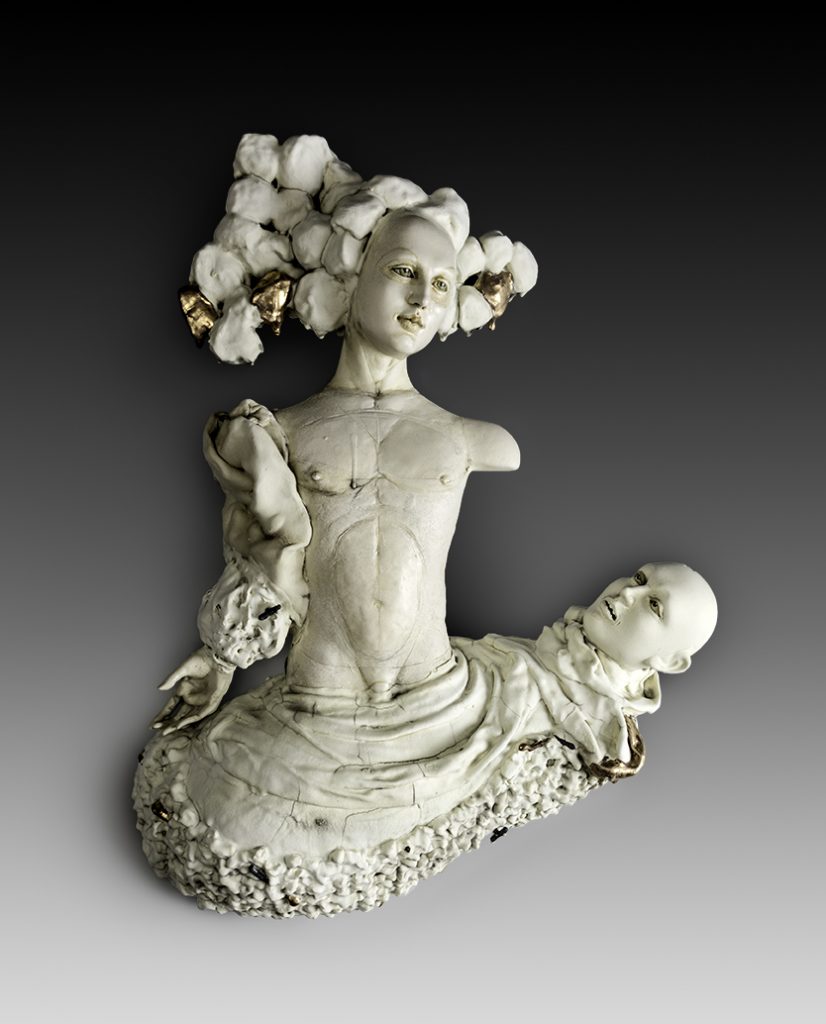 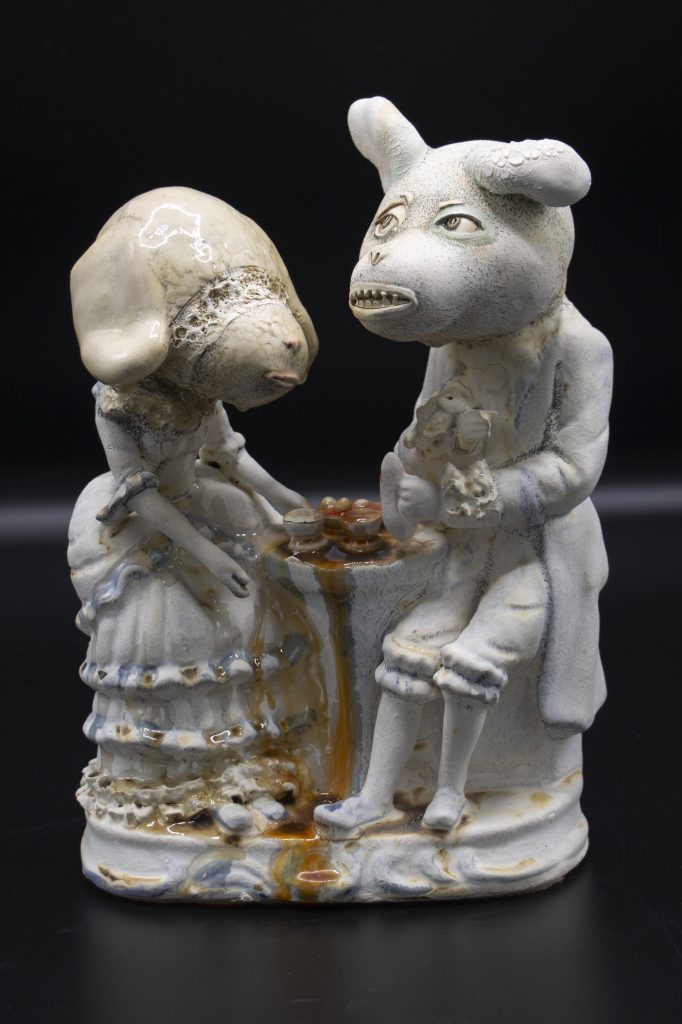 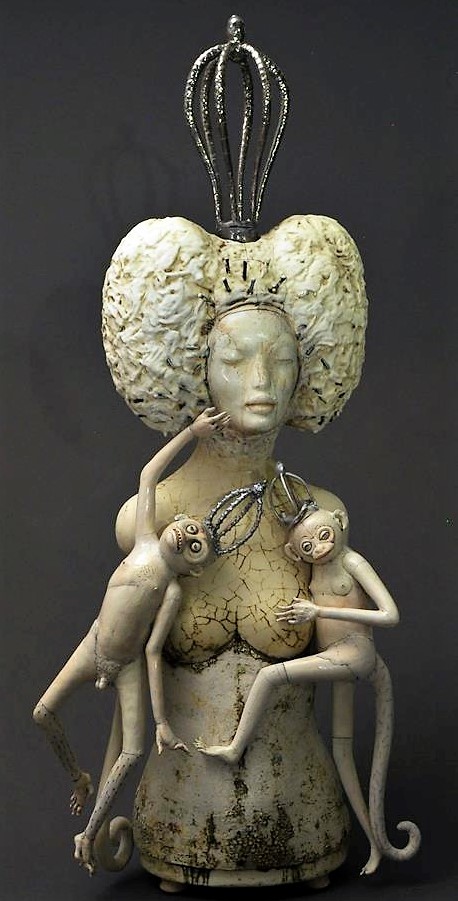 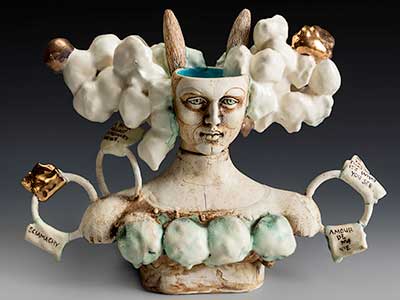 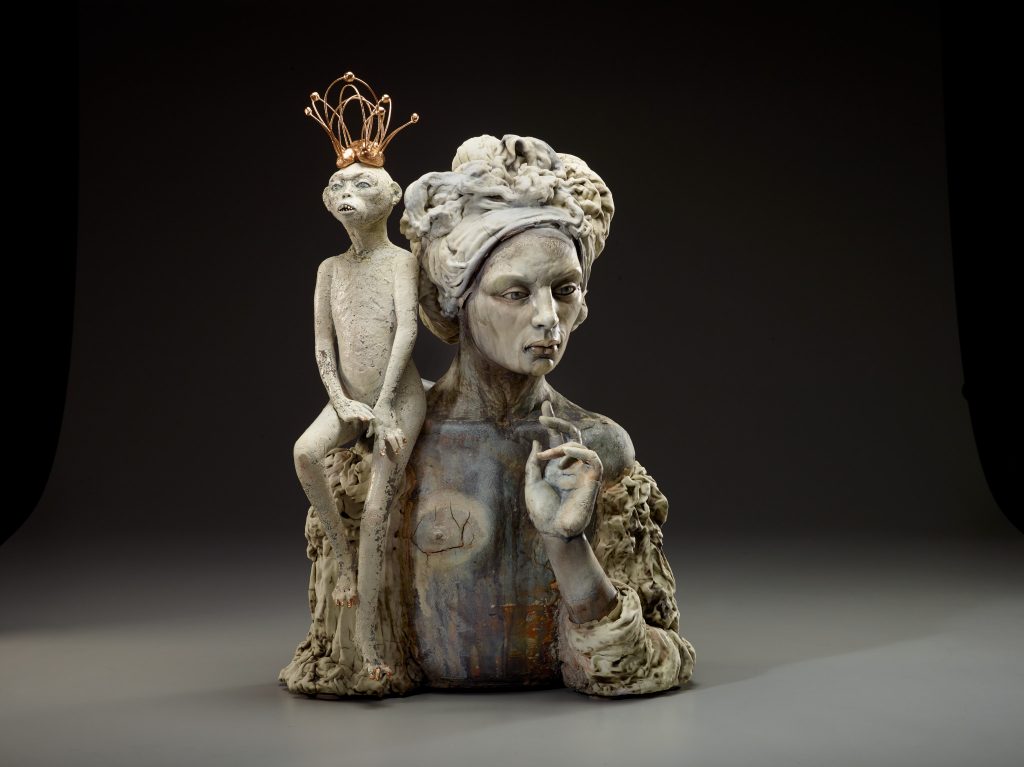 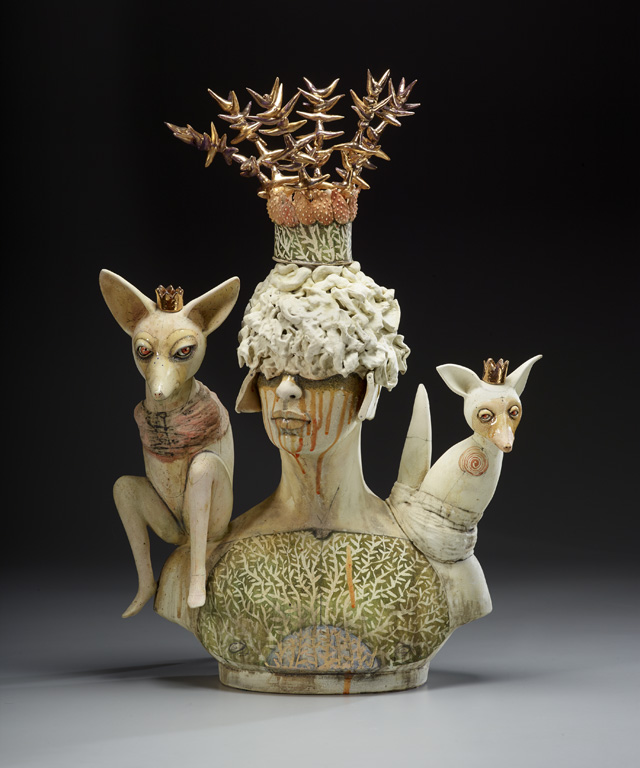 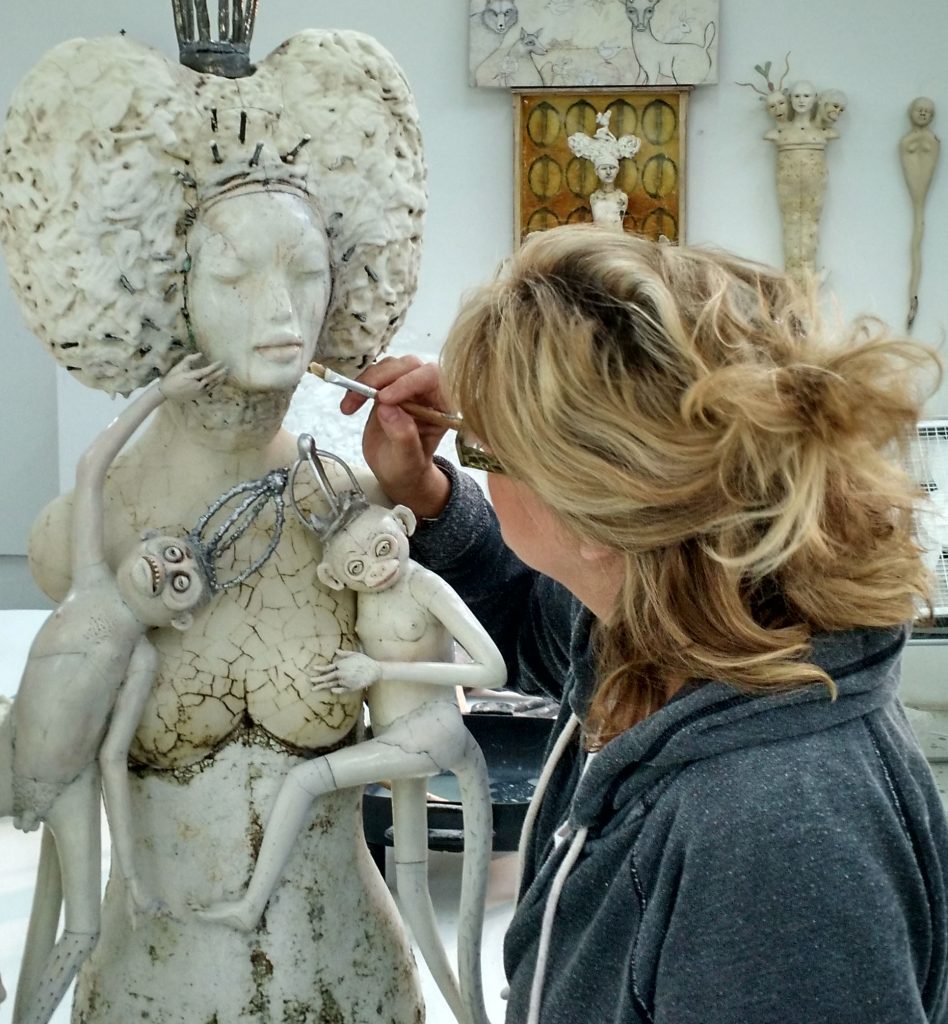 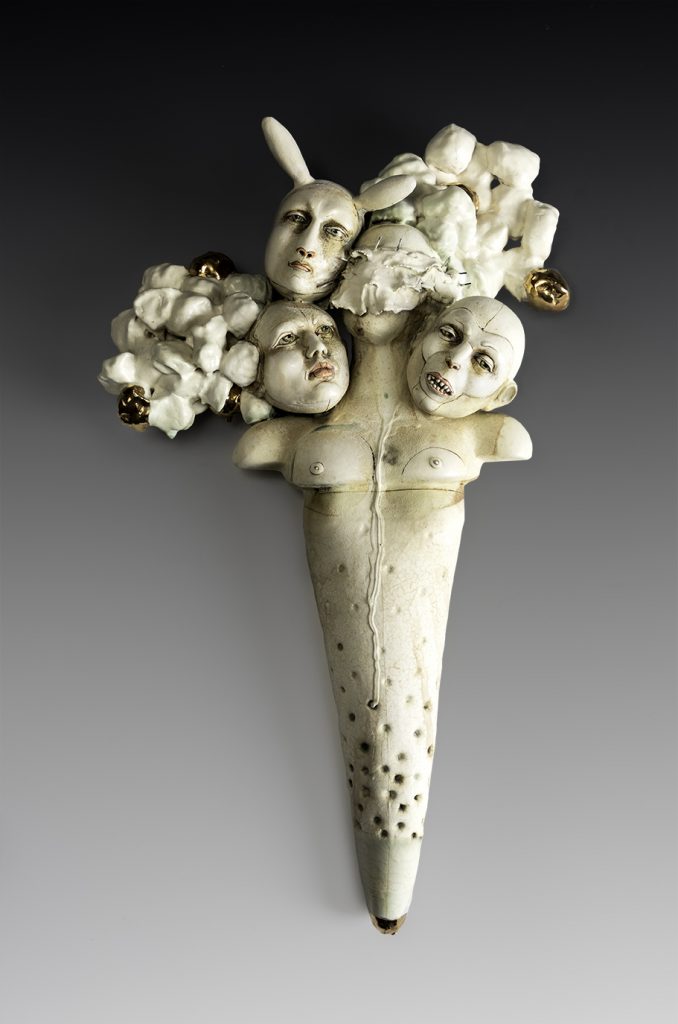 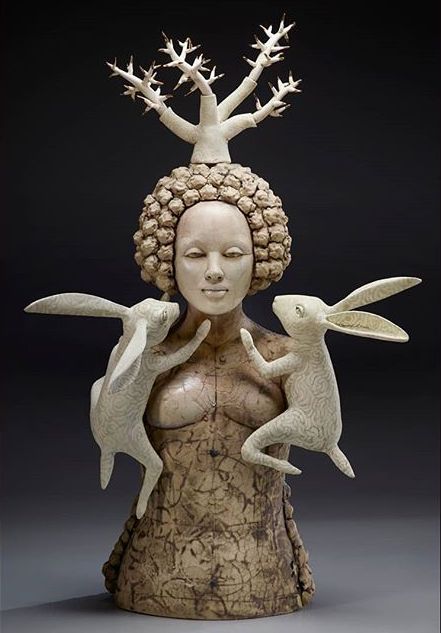 To learn more about Lisa Clague purchase her book here.

To see Lisa or one of our other artists teach an online ceramic class, click below.