Hung Liu will be joining us at the Art of Painting in the 21st Century! Her painting Grandfather Liu & His Qian Shan Friends will be on display March 7th through April 7th, and she will do a demonstration Saturday, March 31st from 4:00 – 5:00 pm.

Hung Liu grew up under the Maoist regime and experienced the Great Leap Forward as well as the Cultural Revolution. She was born in Changchun, China in 1948, a year before the creation of the People’s Republic of China. She was trained as a social realist painter and muralist. Armed with a sturdy foundation, she decided to move to the States and earn her MFA at the University of California, San Diego in the 1980s. She went on to become faculty at Mills College in 1990 and she continues to work and thrive as a tenured professor in the Art Department.

Liu is one of the most revered Chinese Painters working in the United States today.  Her work meditates on the connection between memory and history, among other themes. Her detailed paintings express the interactions between documented evidence and artistic expression.  By utilizing vintage photographs as her references, she revives the memory of people who have been lost in the sweep of history. These mysterious, richly-layered, figurative portraits express multifarious references to history and culture. Hung Liu has a gift of creating atmospheres within her work. They tell stories and suggest a deeper background that remains invisible to the viewer. Oftentimes, the photos are of prostitutes; they are extremely rare as they were made in limited editions to distribute to patrons. Her stylized depictions of these women portray them in a similar vein as historical figures. The photorealism she applies to her work is tempered by her technique of diluting paint with licensed oil. She drips this mixture upon the portraits, which results in a blurring, distorting effect. The paintings feel like a memory and, like memories, they will continue to fade and change over time. Don’t miss this incredible opportunity to view these time capsules and see one of the top Chinese-American painters of our time. 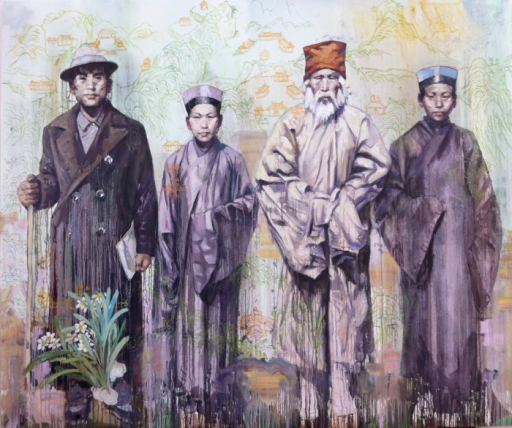